His to Command - Kallista Dane

Welcome back to my blog Kallista! I'm so pleased to have you here again, with His to Command this time! 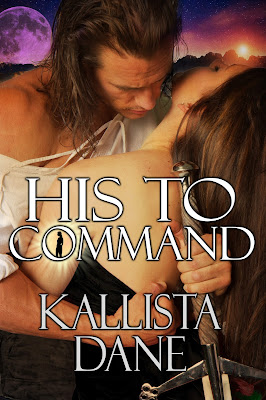 Blurb
When Amanda Jane Norris sets out on an undercover mission to infiltrate the ranks of a rogue general on the planet of Neodyma, a world which has turned its back on modern technology, she has complete confidence in her ability to complete her task. But then things go terribly wrong…

Captured by the power-mad general, Amanda’s ordeal begins with a thorough, intimate physical examination which leaves her both utterly humiliated and helplessly aroused. Her body’s intense response to the embarrassing procedure ensures that she will be sent to join the harem the general provides for his men, but only after she is punished for her failed attempt at espionage. After a long, hard spanking in the public square, Amanda is fitted with the red tail of a harlot and prepared for her training.

She is given first to Kaden, a warrior on a secret errand of his own. He quickly proves more than willing to compel her submission with a firm hand applied to her bare bottom, but his plans for her are very different from the general’s. When Amanda first experiences the intense pleasure that a man’s mastery of her body can bring, it is unlike anything she has felt before, and though it fills her with shame she is left begging for more. But can she afford to risk asking for Kaden’s help bringing down the general?

Excerpt: He snapped out something else and the soldier stopped spanking her as abruptly as he’d started.  He twisted her body so she was laying flat again and sat her heel back on the table, this time keeping one hand locked around her ankle.  But Thelo never stopped. His fingers continued their insolent invasion.
The High Priest met her eyes again and ran his tongue slowly around his lips.  Then, to her horror, he bent his head and touched his wet tongue to her clitoris.  She tried desperately to control her mind, but the intense, intimate physical contact was so new and unfamiliar.  He licked her there, flicking his tongue back and forth as the core of her pleasure grew hard.  All her mental training disappeared.  To her shock, her body began responding to the savage treatment the same way it did in her planned sessions of self-gratification.
She panted heavily, fighting the surge of erotic sensations.  Her bottom stinging, her vagina wet, and now the bundle of nerves between her legs throbbing and pulsing.  His hot tongue kept up the onslaught until she was shaking, ready to explode.

Kallista’s Bio
Like my ancestor Scheherezade, I cannot sing or dance or paint.  I have but one talent.  I am a weaver of words.  I love to tell stories of strong women and the even stronger men who suddenly show up in their lives when they expect it least and need it most.
As a little girl I was afraid to take risks.  But when I grew up, I vowed never to let the thrills in life pass me by because of fear.  Since then, I’ve walked on the Great Wall of China, gone scuba diving in underwater caves, and skied a black diamond run in Vail. But the greatest risk I’ve taken is sharing my naughtiest secret fantasies in the books I write.