Welcome back to my blog Ashe Barker!

Hi Kelly, and thank you for inviting me over today to share a little about my latest release, A Scandalous Arrangement.

After a foolish wager costs her brother ownership of the weaving mill in Yorkshire which provides her income, Victoria Wynne is left with no choice but to confront the man who took the bet and seek to dissuade him from claiming his prize. Unfortunately for her, that man turns out to be Adam Luke, an experienced, ambitious entrepreneur who is intent on keeping what he won.


Upon meeting her, Adam is enchanted by Victoria’s beauty and charm as well as her nerve and self-reliance. Adam is a man of singular tastes, and when Victoria asks to manage the mill in return for a share of the profits, he offers her a bold proposal of his own. She will continue to run the mill as she has for years, but in return for a substantially larger portion of the profits she will also serve at his beck and call behind closed doors, submitting to him in any way he desires.


Wanting to earn enough money to buy back the mill as quickly as possible—and with some part of her shamefully aroused by the thought of kneeling naked at Adam’s feet—Victoria accepts his terms. But submission initially proves difficult for a woman used to running her own affairs, and soon enough she finds herself bare-bottomed over his knee for a firm lesson in obedience.


Adam’s plans for Victoria run much deeper than just an occasional spanking. She will be stripped naked, bound, and teased until she is aching for release, and then at last he will take her long and hard. As Adam continues to train her, teaching her to yield to his mastery while bringing her more pleasure than she ever thought possible, Victoria cannot help falling for him. But can a lifelong bond truly emerge from such a scandalous arrangement? 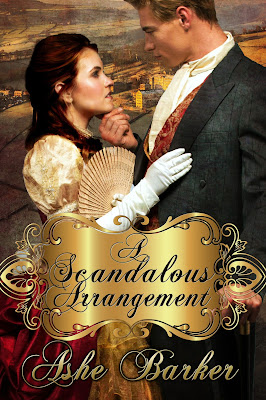 And now, an excerpt from A Scandalous Arrangement.

On impulse she scrambled from her bed and rushed across to the swivel mirror beside her wardrobe. She angled it, then lifted the back of her shift. She chose not to dwell on the absence of her usual night time attire of a silk nightdress.
Her bottom was striped in soft pink, and several bruises were forming. Perhaps the marks would have been more vivid last night, she rather suspected as much but even so there was still plenty of evidence of his discipline.
She allowed her shift to drop back down over her body and sat on the edge of her bed, forcing herself to bear the sharp pain as her weight pressed her abused bottom against the mattress. She bore bruises, and he had put them on her. He was no gentleman, that was for sure.
So, what was he?
Victoria was not given to self-deception. She should resent his treatment of her, but she did not. She had yet to fathom just what she did think of it, but her feelings were far from hostile. She could best be described as uncertain, she decided. She needed to consider, to analyse, and eventually she would understand.
The delicate china cup on her bedside table caught her eye. It was full of tea, now quite cold. She frowned, how long had that been there? She had no recollection of seeing it when she came to bed.
Not that she had seen much of anything in truth. She vaguely recalled ascending the stairs, her fingers tucked in the crook of Adam Luke's elbow. He had escorted her to her bedroom door, then when she would have bid him a polite goodnight he had opened it and steered her through into her private chamber. Still, she had offered no protest. Nor had she made a fuss when he turned her around and unhooked the row of buttons down the back of her dress and peeled the garment from her shoulders. She had lifted her feet obediently when he ordered it, allowing him to remove the rest of her clothing. When she stood before him in just her shift he had pulled back her bedclothes and ordered her into the comforting warmth. And she had obeyed again. He had leaned over, dropped a swift kiss on her mouth, and left.
She had fallen asleep within moments, and knew nothing else until a few minutes ago. Now, she felt strange, not herself somehow.
She was refreshed, certainly, she had slept better than she recalled for a long time. She felt relaxed, at ease, oddly liberated. She wanted to see Adam Luke, talk to him. She had a niggling suspicion that she might even not object too strenuously should he wish to spank her again. Not today, naturally. But sometime,
She was going to accept his proposition. The realisation hit her with resounding clarity. She would do it, because it was expedient. And because she wanted to. With that acceptance, another possibility started to uncurl in her mind. A secret, deep, longing that up to now she had refused to allow either form or substance because it was simply impossible. Her dream was growing, solidifying, demanding recognition. Adam Luke wanted her to be his mistress and to submit to these strange, wonderful, terrifying activities and she found she wanted that too. Well, some of it. Enough, she believed. He had her mill, and he had something she wanted too. She would have her side of this bargain.

I’ve been an avid reader of fiction for many years, erotic and other genres. I still love reading, the hotter the better. But now I have a good excuse for my guilty pleasure – research.
I tend to draw on my own experience to lend colour, detail and realism to my plots and characters. An incident here, a chance remark there, a bizarre event or quirky character, any of these can spark a story idea.
When not writing – which is not very often these days - my time is divided between my role as resident taxi driver for my teenage daughter, and caring for a menagerie of dogs, rabbits, tortoises.  And a very grumpy cockatiel.
I have twenty four (at the last count) titles on general release with publishers on both sides of the Atlantic, and I have several more in the pipeline. All my books feature BDSM. I write explicit stories, always hot, but they offer far more than just sizzling sex. I like to read about complex characters, and compelling plots, so that’s what I write too. Strong, demanding Doms are a given, often paired with new submissives who have a lot to learn.
I have a pile of story ideas still to work through, and keep thinking of new ones at the most unlikely moments, so you can expect to see a lot more from me.
I love to hear from readers. You can find me on my blog, and on the Totally Bound site. I’m on Facebook, and twitter and now on Tsu as well. I’m on Pinterest too, and Goodreads