Ravyn Rayne is back on my blog with her dystopian erotica novel The Emerald Virgin book one of the Gem Apocalypse series.


Blurb:
Emerald – a girl with green eyes and a rarity after the horrific genocide that slaughtered millions.
After the war, King Gideon rose in power. A lust-filled and greedy king that believed in the power of slavery.
At eighteen, women were required to come before King Gideon and his four sons, to offer themselves as a courtesan. The princes took only those they found most attractive and alluring. The rest were returned to their homes with a brand on their wrist proving they had been through the process and rejected. Ignoring the ritual was punishable by death.
Aria Stone had been kept hidden from the princes and the ceremony, because she was an Emerald. At twenty-three, the royal guards storm her home, murder her mother, and drag her to court. She must face the four princes.
A dystopian erotic adventure. 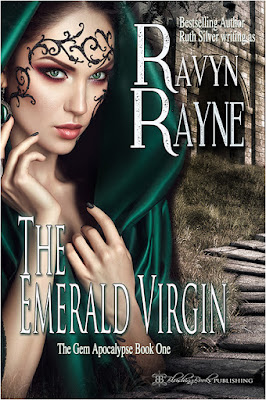 "Your guards murdered my mother, dragged and drugged me from my home. Anything else you wish to know?" Aria asked, short-tempered.
James stepped close enough to feel his breath against her cheek. "I can see your reluctance to be here, but I assure you no harm will come to you, Aria."
It was hard to believe him given the circumstances. Aria crossed her arms defensively. She didn't say a word. There was nothing to say that would please him and make her happy. She wouldn't lie or pretend to care about him when anger ebbed away at her and boiled in her blood. Not when he made Aria think of her mother and asked her about what happened, as if he pretended to care. Unlike the other women here looking for something, she just wanted her freedom returned. Pretending eluded her.

Author Interview:
What's the last book you read?
The Science of Submission by Victoria Winters.

What are you currently reading?
Late Blooming Lily by Bryony Kildare.

The Emerald Virgin takes place in the future. Can you tell us how much in the future it is?
Not as far away as one might think. In the third book we get a glimpse of some past technology, including cars that are self-driving. It might sound like science fiction but the technology is already available.

Ravyn is a sassy, fun-loving, and adventure-seeking young woman. She loves to travel and can’t wait for her next vacation, wherever it might be.

Ravyn writes romantic erotica. She began writing romance novels in college, spending her down time either reading a book or writing fiction. Please don’t make her choose between the two, she loves them equally.

Although BURNING DESIRE is her debut romantic erotica novel, it is not her first published book. She has been published professionally since 2013. You can find her other books here.
Facebook | Twitter | Tsu | Amazon | Website