Six of the Best - The Ways of the West


“Come to the supply wagon,” Mr Jordan ordered as they approached, his voice hard, his face stern and unyielding. “I told you what was going to happen. You WILL learn to obey my orders. Are you going to accept your punishment or would you rather I pay you off now?”
Johnny squeezed Jessica’s shoulders. She was trying to be brave, but he could tell she was afraid. He watched as she took a deep breath and raised her chin.
“I will accept whatever punishment you give me.”
“Good.”
Johnny looked around the camp as darkness encroached. The supply wagon was right on the edge, and the men had obviously been given orders to remain by the fire, as they were all hunkered down talking quietly and playing poker. He was relieved. Jessica would have some modicum of privacy at least, although they weren’t far enough away for her cries to go unheard. And she would cry – Johnny was sure of that. No matter how hard she fought it, the razor strop would bring her to sobbing and wailing, that was certain.
Hanging a lantern on a hook on the back of the wagon, Mr Jordan leaned inside and took the razor strop down off the wall. “Take down your britches and bend over the back of the wagon,” he ordered gruffly.

Her eyes glistened with tears already but her fingers fumbled with the buttons at her small waist. Johnny’s heart constricted with pain, watching her. And surprisingly, he was jealous. Jessica was his girl – his responsibility.  He couldn’t stand back and let another man punish her. He stepped forward. 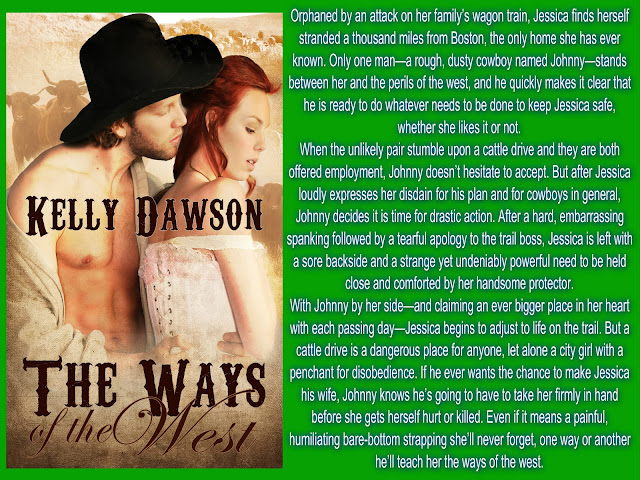 Please check out the other participants in the #6BestHop below: