~ The Hand of Vengeance ~ By Renee Rose ~

Welcome Renee Rose to my blog to talk about The Hand of Vengeance!

Renee: Thank you so much for having me today to talk about my first sci-fi, The Hand of Vengeance.  The book gets its name from the hero, Blade Vengeance.  The rebels use code phrases when using their communications units and his identifier is: The hand of vengeance strikes. Obviously, I love the double entendre of having that in a spanking romance! :)

In The Hand of Vengeance, The heroine is a doctor on a humanitarian mission from Earth. When she’s kidnapped by the rebels to perform a difficult surgery, their airship is shot down and she’s stranded in a canyon with Blade. She doesn’t know anything about living in the wild, so she’s forced to rely on the intimidating warrior for survival.

Blurb: On a humanitarian mission to the war-torn planet Jesel, Dr. Lara Simmons is used to dealing with lack of supplies, power outages and the constant earthquakes that afflict the planet. But when she's captured by the rebels who need her to perform a life-saving surgery, she finds herself in a situation her medical training didn't prepare her for.


When the airship is blown out of the sky, she ends up in the Jeselian wilderness with no one to rely on but Blade Vengeance, an enormous tattooed rebel warrior. Dominant and unyielding, he doesn't hesitate to take her in hand when she disobeys the rules he lays out for her. Yet she soon learns he also knows how to deliver pleasure--with a passion she's never before experienced.

Blade finds the doctor from Earth sexy as hell, especially when she's giving him attitude, but once he delivers her to headquarters, he tries to pull back from her allure. Known for single-handedly starting the revolution and freeing many of his people, his life is one of hardship, slavery and war. Going soft on a woman isn't part of his plan, especially with the final strike of the revolution so close. But when he sends Lara back to Earth to keep her safe during the upcoming battle, he inadvertently delivers her into enemy hands. Can he find and save her from the revolution he caused?
Publishers Note: This story contains spanking and explicit sex scenes, including anal penetration. If such subject matter offends, do not buy this book. 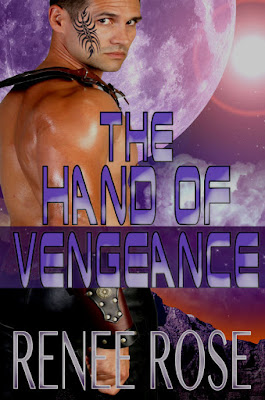 BUY IT ON AMAZON HERE
OR ON BARNES & NOBLE HERE


Hot excerpt:
“What the—?” Lara pounded her little fists on his back and kicked her legs. “Let me down, you big oaf!”
Somehow, Dog understood his feelings for the doctor, because despite the fact that she fought him, the canine trotted behind licking her face. She spluttered.
He ignored her antics, striding inside the main building, where he knew they’d given her one of the few, coveted indoor bedrooms. He swung open the door and carried her inside, dropping her to her feet.
“Out.” He looked at Dog and pointed at the door. Dog gave him a forlorn look, but dutifully trotted out. “Stay.” He snapped and pointed to the floor outside the door. Dog lay down. “Good boy.” He went back in and shut the door behind them.
Lara stood glaring with her hands on her hips, her face flushed an enchanting shade of pink.
His cock twitched. He loved her feisty. “Now, are you going to go to bed quietly, or do you need me to help you?”
He didn’t expect acquiescence of any kind from her. She’d been running on adrenaline for almost two planet rotations, which he knew from personal experience made it impossible to settle down, much less sleep.
Her lip curled as she regarded him with a mixture of shock and disbelief. Even so, a blush crept up her neck. She opened her mouth, then closed it again. He suspected she wanted to ask how he intended to help her, but had thought better of it.
She moved for the door, but he stepped to block her path.
“You have until the count of three to get yourself in that bed. One...two...three.”
Lara hadn’t moved. She gaped at him.
One corner of his mouth turned up as he reached for her waist and lifted her into the air. “I kind of figured things would go this way.”
“Wait.” She kicked her legs and gripped his wrists. “Put me down.”
He plopped down on the cot and angled her over his knees with her torso resting on the narrow bed. Someone must have provided her with a change of clothes, because the leggings were different, and when he peeled them down, the scrap of fabric she’d worn as panties had been replaced with a lacey purple pair.
He smiled at the sight and pulled them down, as well, caging Lara’s flailing hand when she reached back to catch them. He clapped his palm down on one cheek hard, then rubbed away the sting. He repeated the action on the other side. “This isn’t punishment, doctor. It’s tension release. You’re too wound up to sleep.” He smacked her again.
“Damn straight I’m too—”
He picked up both the speed and intensity of the slaps, which made her gasp and choke on her words.
“The sooner you relax into this, the sooner it will be over.”
“You can’t just march into my clinic, throw me over your shoulder and—ow! God, that hurts! Stop it!”
She twisted to the side enough to free her other hand, which came flying back to cover herself. He grabbed it and pinned it to her other wrist against her lower back.
“Naughty, naughty, doctor. You are hardly cooperating.”