Alexis Alvarez with Myka and the Millionaire!

Welcome to my blog Alexis! I'm halfway through reading Myka and the Millionaire and I'm really enjoying it! 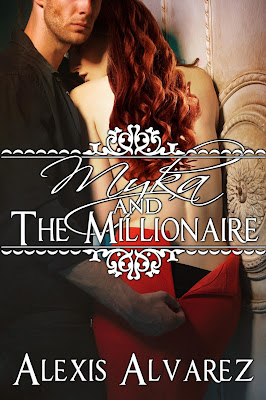 Blurb
Computer expert Myka Thomas is determined to start her own business, and the last thing she needs is a man bossing her around and getting in the way. But Gabriel Chevalier is not just any man, and when the dashing, dominant millionaire makes his interest in her very clear, Myka cannot resist his advances. Stripped bare, spanked soundly, and brought to one shattering climax after another, she soon finds herself both yielding even more completely to his command of her body and even begging shamelessly for more of his masterful lovemaking.

As Myka juggles two demanding jobs, she savors the time she spends in Gabriel's palatial home. When she is in his presence, surrendering to his firm, loving control seems natural, even when that means submitting to a painful, embarrassing spanking when she has been disobedient. Before she can stop herself, Myka is falling hard for Gabriel, but can she dare to risk giving her heart to a man with so many shadows in his past that there may be no room for her in his future?

Excerpt
“Not feeling so bold anymore?”  Gabriel teased, as Myka stared at the assortment of items.  “Wondering what I have planned? Answer me.”
“Are you going to use – all of those?”
Laid out together were a leather paddle, a belt, a shiny silver butt plug, some delicate but wicked looking nipple clamps, and a few other things that she assumed were vibrator-style toys that she didn’t recognize.
“Yes, eventually, if you let me. Tonight, though? We’ll pick two. I’ll pick one, and I’ll let you pick the other. What’s your choice, Myka?”
“I don’t know. I –”
“Myka. Choose one. Now.” His voice was firm.
“I can’t –”
“If you don’t choose? I will. And it might not be your secret fantasy, yes?”
“Fine. I’ll choose…the paddle.”  Myka felt dizzy with excitement. She’d watched it twice, she’d fantasized about it a hundred times, and now she was going to feel it for herself.  But oh God, what was he going to choose?
“Good choice,” he said. “I already promised I’d make your ass pink. You  remember that, don’t you?”
“Yes, sir,” she whispered. “Which will you pick?”
“I’ll surprise you,” he said in a smooth voice, collecting up the things and depositing them in a pile on a small table near the bed.  “First, though,” and he paused to pull the panties from her wrists, “let’s start by having you undress fully.”
Myka rubbed the red marks on her wrists as he settled himself in a low chair, legs spread, hands on his thighs. “Take off everything that’s left, Myka. Show me what’s mine tonight. Leave the shoes.”
Myka slowly slid off her shirt, dropped it to the ground.  Gabriel held her eyes as she unsnapped her bra and slowly lowered it, and stood there before him, naked except for her shiny heels.
“Nice,” he said, his voice husky. “Beautiful, Myka, you’re fucking gorgeous.” Then he nodded his head towards a chair across the room. “There’s a red tie. Go bring it to me.”
Myka took a step and he shook his head. “Hands and knees.”
“Gabriel, what –” Myka started, stopped as she saw the heat in his eyes.
“I think you know what  I mean,” he said. “Don’t you?”
“You want me to crawl?” Myka stood still, her face burning. “Seriously?”
“Do I look like I’m joking?” Gabriel’s voice was light, but his eyes were intense. “You do what I say tonight or you get punished.  Are you hoping for a cherry red ass instead of pink? It will be intense for your first time, but I’ll do it.”  His smile was wicked, and to Myka, it was also an offer. Did she want the harder spanking? Or not?

OUT NOW ON AMAZON!

Alexis Alvarez is a romance writer, a photographer, an engineer, a dachshund owner, a mother, a reader, and the kind of person who enjoys inappropriate jokes with her family.  Her romance book heroines are strong, intelligent women who enjoy submission on their own terms and do not compromise their integrity and feminism.  When she’s not travelling or taking pictures, you can find her in her home office, drinking La Croix water and dreaming up new novels.