I'm so pleased to have Alyssa Bailey on my blog today with Loving Liam the third book in The O'Connor's series. 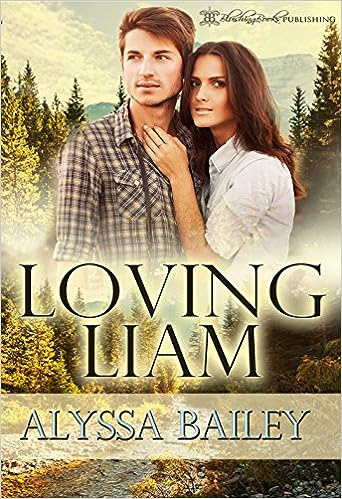 Blurb: Just when newly married Jocelyn thought life could not get any better things began to crumble around her. She and Liam live an idyllic life on a prosperous ranch in the corner of the Bitterroot Mountains. Jocelyn knows better, but she has a secret that she’s keeping from Liam that threatens their happy existence and she knows what her traditional husband thinks about secrets. Is it worth the risk?

Jocelyn is the wife that Liam has longed for, right down to allowing him his old-fashioned way of dealing with things when she steps too far out of bounds. But she has trouble trusting him with everything. And now, something is not right and when he discovers how wrong things are, he is not sure how to handle his wife’s betrayal or if he even can.


After waiting ten years to finally have the life they have longed for, will Jocelyn choose to throw it all away to keep her secrets safe?

Excerpt: He flipped the overhead light on and she gave him a withering look. He took a step inside the bedroom.
“You are more stubborn than my prize bull. Jocelyn, come to bed. I know you are angry, but you are not sleeping in here. You belong in our bed.”
Jocelyn gave no indication that she was even hearing him. Liam turned and closed the bedroom door. Jocelyn listened as he walked closer to her and she heard him unbuckle his belt. Liam never used a belt, not ever. He had threatened to if things did not change before, but he never had to resort to it. Her muscles tightened. Her body tensed. Her breath stilled. And then Liam sighed.
He threw the covering back and grabbed her up, laying her across the bed. He lifted her gown. Jocelyn did not wear panties to bed. The sudden truth of the moment put Jocelyn in a panic. She thrashed around to get away from her husband and then when she felt the first lash of the belt she stilled.
He had done it. He had actually done it. He was going to spank her into submission to agree to what he wanted. At this moment, they were not a couple; this was not a partnership or even a marriage. It was nothing she wanted. She cried quietly. Not because he was using a belt on her to get her compliance, it was because he thought it was acceptable.
She endured the slaps of the belt and she felt the hesitation and knew, even if her husband did not, that deep down he was rejecting his actions. She lay on the bed as he laid stripe after stripe on her as her heart broke. Then Liam growled, “This isn’t right.” The belt flew across the room to slam into the wall and slide to the floor. He returned Jocelyn to her horizontal position in Kelli’s bed. He reached to cover her up and crouched on his haunches to look into her face. He gently wiped the silent tears that rolled down her cheek. His face crumbled.
“I’m sorry. This isn’t working.” He wiped more tears and then quietly left the room. Jocelyn let the dam break on her pent up emotions and she cried out her heartbreak.

Author Bio
Alyssa Bailey is a dyed in the wool Texan living in the beauty of Southeast Alaska with her husband, her youngest four (of eleven) children, two dogs and two cats. Her first memory of books was when her mother read to her as a small child. She began writing as soon as she could put letters together to form words. Her first story at the age of six was about a performing horse that ran away from the circus. As she got older and read more of a variety of books, she would say, “I can do better than that” and then rewrite them in her head. She was writing fanfiction before fanfiction was a ‘thing’.
In high school and college, she won journalism and special recognition for her academic and fictional writing. Alyssa is a firm believer in all things spanking. She loves writing about domestic discipline and power exchanges between strong, intelligent women who are not afraid to make a stand and men confident enough to give them their space but Alpha enough to keep his woman safe, in spite of herself. Her characters predominately live in Regency England amongst lords and ladies, in the contemporary realm amongst men and women of the world, and all things Cowboy.  Contact her, she loves to chat, and as always, have a Spankolicious day!