I have the very talented Heather Hart visiting me today to promote Spy Games Book 1: Assassins published by Blushing Books.

Naming characters in my books is something I've been struggling with lately, changing the names over and over again until I confuse myself and use multiple names for the same character by accident. So I asked Heather how she goes about it:

How important are names to you in your books? Do you choose the names based on liking the way it sounds or the meaning? Do you have any name choosing resources you recommend?


Sometimes a character name just comes to me, and sometimes they have meaning. But it’s entirely random. I recommend choosing names that are appropriate for the setting, and I use Google if I’m looking for historically appropriate names.


I love this tagline: "Undercover submissive falls for her mark"

Fresh out of training, the Agency sends Kassie Shannon into the secret world of Robert Redmond. They know he’s using his billion-dollar software company to steal sensitive information. What they don’t know is who he is selling the stolen information to, and it’s her job to find out.


Naturally cautious, Robert has never let a woman get under his skin. Until now. There’s something appealing about this inquisitive brunette with her oddly changeable personality and her passion for all things painful. He agrees to become her master, but soon falls for the chameleon beauty who is quickly becoming the most promising novice he has ever trained.


For Kassie there’s one big problem, though. The first rule of spying is not to fall in love on the job. Yet it’s hard to keep a professional detachment when your mark is all you ever wanted in a partner, and one who keeps opening doors to pleasures she never knew existed.


Still, sooner or later she will have to choose between two opposing demands—the cause she believes in, or the man she is bound to. Whichever choice she makes, it is likely that no one will win. 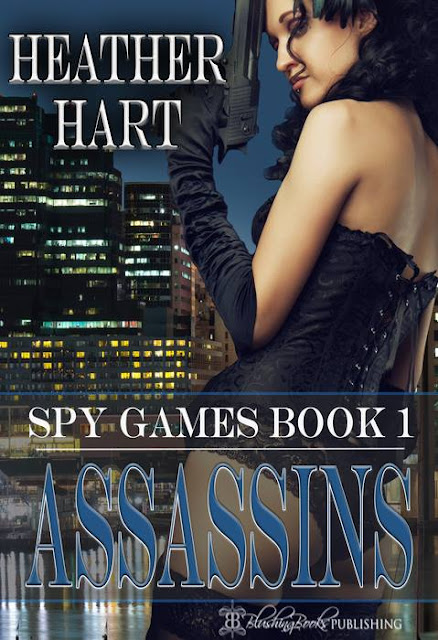 "So you're ready to try something new tonight?"
Her palm flattened on her chest, and she stared resolutely into his eyes. "Yes. I am ready."
She was an odd mixture of shyness and determination, that was for sure. He wished he could read her better, but her heart wasn't open to him yet. Suddenly he wanted her to be, he wanted her more than anyone else he had ever desired, and he was about ready to say fuck the dinner, and take her home there and then. But impulsiveness had never been his way. Indeed, it turned him on almost as much to exercise control over his baser instincts as to indulge them.
"What is your tolerance for pain?"
"I don't know. I've never been tested. Are you vicious? Sadistic?"
"No. I won't hurt you to punish you."
"Then why do it at all?"
The small amount of wine had brought redness to her cheeks that enhanced her beauty even further.
"There is a pleasure only to be found by exploring your pain threshold. Just before your suffering becomes unbearable, there is a point at which pain and pleasure meet and enhance each other. My goal is to take you to that place, to help you experience it, to revel in it."
"But what if it's too much? Or I never reach that point? What if for me pain is just pain, and I hate it?"
He finished his glass and began pouring another. "You've heard of safe words?"
"Sure."
"When you've reached your limit, you'll use yours. Trust me, Kassie; I would never take you beyond that point. And even before that, you'll know if it's not for you, and I hope you know you can tell me that if it comes to it."
"If I was, wouldn't you be disappointed?"
"I'd be more disappointed if you let me fuck you without taking pleasure from me."
"I see."
He hoped she did. Desperately. There was something about her, and he couldn't wait to get her out of this place to play with her.
And after that, then, well, then we'll see, won't we?

When she’s not frantically scribbling away she’s a cat worshipper and curry fanatic. If you like what she writes, please feel free to drop her a line at authorheatherhart@gmail[dot]com.