We Need a Little Christmas

I can't believe Christmas is nearly here! And what better way to get into the spirit of the festive season than with a recently-released Christmas-themed ageplay book by two spanky authors I love - Katherine Deane and Abbie Adams? 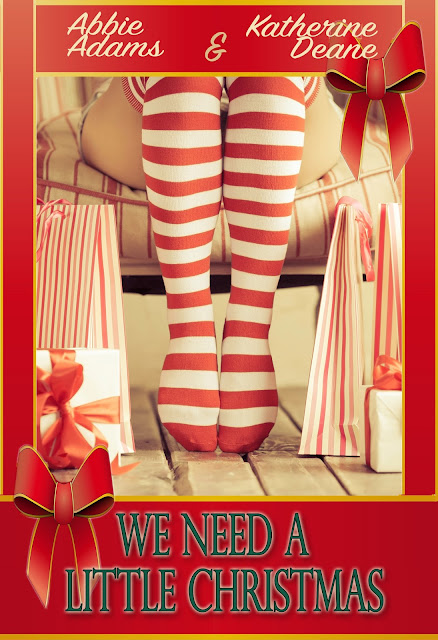 Blurb for: A Little Sugar A Little Spice, by Abbie Adams
Christmas is a time of magic and anticipation. Meri is far less concerned about what might be under her tree than she is about who is showing up on her doorstep. Though she adores her sister, Kim, even she has to admit that the woman tends to be the 'naughty' to Meri's 'nice'. Her husband, Sean, has already warned his little girl that he won't hesitate to turn her over his knee if she doesn't remember that their household has definite rules that are not to be broken. If she wishes to test her Daddy's resolve, instead of visions of sugarplums dancing in her head, his naughty little one will be dancing to the tune of a thick wooden spoon.
It doesn't take but two days before Kim has once again shown her true colors. Despite Meri's willingness to excuse her behavior, she finally admits that Kim's life would be so much better if someone cared for her the way her own Daddy did. Perhaps if Kim had her own bottom reddened, she would learn the error of her ways but would Meri ever have the courage to reveal the dynamics of her life to her sister?
When Sean invites Kim's boyfriend to dinner, the young woman is shocked-especially since she'd told Meri that they had broken up. She knows she isn't happy with her life but is worried what her sister might think if she learns what Kim really desires. Kyle is far less hesitant in reminding the stubborn woman he adores exactly who is in charge. Will the two sisters take the chance to unwrap the secrets they've both held onto for so long? Will they discover that loving men who appreciate both a little sugar and a little spice fulfills them in all ways and is the best Christmas present they could ever receive?

Excerpt: Now Sean crossed his own arms over his chest and sat back against the counter next to her. "You are an adult are you? Since when? You are making a much bigger deal of this than I am and I don't understand it one bit, but I'll let it go for now. I'm going to lock up. I want your adult self in the bed when I return."

As much as Meri was or wanted to be submissive, she was also very stubborn and in a mood, could be quite taxing on her husband's patience, or so she'd been told—many times. It was probably that little brat inside her which urged her into PJ's just then.

PJ's were a decision to be made and decisions were hard. When choosing between a sexy black teddy or a full one-pieced fleece-lined zippered footie pajama, she'd always choose the jammies. Her Daddy appreciated a teddy, or even one of the baby-doll nighties he'd picked out for her. He always went out of his way to meet her needs, whether nurturing, disciplining or making love like mad-monkeys. And he'd said "adult-self." She let her hand rest in the drawer with her silky, sexy nighties.

But he was being rather difficult tonight, so she opened the drawer next to it and fingered the warm fleecy sky blue jammies with the white lambs. Things could get rather hot if she opted for them… Sometimes playing hard to get led to her getting it hard—and that was always fun.

Blurb for We Need a Little Christmas, by Katherine Deane
Thirty-three year old, Ivy Henry seems to have it all. A well-paying job, a new house, and her wonderful HOH/husband, Jack. At her request, they had incorporated Domestic Discipline into their marriage a few years ago and she flourished under his love, guidance, and support.
But, this year's holiday season is wreaking havoc on their calm relationship. Between the stress of work and hosting this year's Christmas Eve party for all the family, Ivy is becoming more and more out of control. To top it off, she has a secret she can't share with Jack.
Their relationship is wonderful but she wants more—a chance to explore her younger side. Ivy desires to do Age Play but is fighting her needs because it is embarrassing. How can she trust Jack not to laugh when she tells him she wants to curl up on his lap at night and call him Daddy?
Jack has been watching Ivy slip away emotionally for the past year. His beautiful, sweet wife is now always angry and ill tempered. DD just doesn't seem to be cutting it any longer. He can tell she is unhappy, but doesn't know how to help her until the day he finds her chat sessions on her computer. Discovering hope again, he begins to make plans to escape from this stressful holiday. He will introduce his precious Ivy to her new daddy—him. They both need to reconnect and they both need a Little Christmas.

"Okay, my sweet little Ivy girl. We are starting now. No more head nodding. You may answer me by calling me Daddy." He tilted her chin so she could see the love and truth in his eyes. He wanted to try out being her daddy. Maybe for only a night. But she was going to accept it. She needed this. She needed him.

Swallowing the huge lump that had lodged in her throat, she nodded, but caught herself when he gave her a stern look. "Y-yes, Daddy." Oh my God, she said it.

"Good girl. Lift up your arms so I can help you get dressed."

"I can do it myself. I'm quite capable of changing my own clothes." She rolled her eyes and turned to pick up the nightgown and slippers. She was over his knee in a flash, and he was spanking her bottom with hard, quick smacks. "Ow, ow, I'm sorry, honey, I mean, Daddy."

He swatted her a few more times, and then let her sag over his lap to catch her breath. "When I tell you do something, little girl, you do it." He pulled down her skirt and panties, and started swatting again. Slow, methodical, claps that echoed through the room. "Little girls who don't obey, get their bare bottoms smacked. Do you understand?"

Abbie is a little girl at heart. She has always lived in a make-believe world, unwilling to share her fantasies with anyone for fear they would laugh at her, or worse, lock her up. She struggles with her desires to have a daddy who will keep her in line and yet baby her constantly. She writes to stay sane; this is her therapy.

Hiding her secret desires hasn't helped her, but sharing it with you, those of you who might also enjoy the same yearnings, well, that makes her happy. Come live inside Abbie's head if you dare.

Katherine Deane is a multi-published, top 100 romantic and BDSM author and romantic at heart.
She loves cheese, red wine, chocolate, and snuggling up with her daughters’ kittens while reading a good book.
When not reading, or writing, you can find her knitting, sewing, crafting, or doing pretty much anything to keep her hands busy. She has taken over the dining room AKA craft room, much to her husband’s dismay. In one of her books, an energetic “craftaholic” would find herself over her husband’s knee for losing an important document in a pile of bi-cone crystals and mod podge. Her real life, and the people in them, give her plenty of ideas to work with.
Katherine has dubbed herself the queen of cheese. Not only is she a former Midwestern Cheese Head; she also loves to incorporate it into her books.
In her opinion, all romance deserves at least one cheesy scene that makes you cry.