~ At Dead of Night ~ by Bethany Leigh

At Dead of Night: Red herrings meet red bottoms in this tale of detecting, discipline and life decisions.

Welcome back to my blog Bethany! Your new book looks great - and I've got lots of questions about it!


At Dead of Night is the title of your new book with Blushing Books. What can you tell us about it?
First up, it’s a detective story. There is a murder, there are lots of suspects, and Lucy, my PI, spends most of her working day trying to find out whodunit. But it’s also a domestic discipline story. Lucy has previously broken up with Noel because of a punishment spanking he gave her when she unnecessarily put her life at risk. The murder case brings Lucy back in contact with Noel, and she has to decide whether her love for him and her enjoyment of playful spankings is stronger than her dislike of punishment.

Where is it set?
It’s a contemporary story, set mostly in London, though Lucy does have to travel to Cornwall to see the scene of the crime and interview some of the suspects.

Do you read a lot of murder mysteries?
Yes! Mystery has been my favourite genre since I can remember. I read Enid Blyton and Nancy Drew as a kid, graduating to authors like Ruth Rendell, Sara Paretsky, Sue Grafton, Elizabeth George, and, more recently, Elly Griffiths. I enjoy mysteries on TV as well – Midsomer Murders is a big favourite.

Is At Dead of Night your first book?
It’s not my first published book (Freedom, an alternate Edwardian history novella, was published by Blushing Books in December), but it is the first book I wrote. When I first started writing it, I found the murder mystery plot came to me very quickly, as did the names and personalities of Lucy’s colleagues at the investigation agency. But I struggled with Lucy and Noel’s relationship – I wanted them to have split up and for Lucy to meet him again during the course of the investigation. I came up with all sorts of reasons for their break-up, but nothing worked. In the early draft, I’d included a scene where Noel gave Lucy a playful spanking, and I always thought of them as practising DD, but didn’t think any publisher would ever accept a storyline like that. When I discovered there were publishers who would, I made DD the reason for their break-up.

What is your next book about and when will it be released?


My next book is an anthology of short stories called A Cure for All Ills. The title story is about a woman with anorexia and a new boyfriend who believes loving discipline will help turn around her troubled relationship with food. The other stories are what I’d call ‘domestic dramas with discipline’. The book will be released on 23 February. 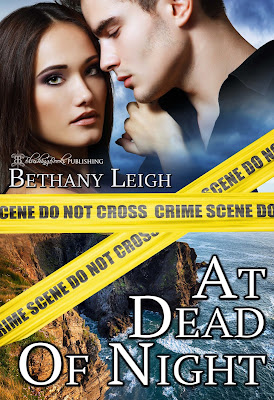 After eight years of working as a PI, Lucy Ogilvy finally has a murder mystery to investigate. Who did kill Marilyn Carter, a convicted murderer who is now a prominent Christian evangelist?

Lucy's investigations bring her back in contact with her ex-boyfriend Noel. They'd like to get back together - but he insists on a domestic discipline relationship, and forbids her to take unnecessary risks for work.

Can Lucy accept Noel's discipline? And how do you investigate a murder without taking a few risks, anyway?

The first time Noel had slapped Lucy, she'd enjoyed it.

It had been a stinging slap on her thigh, delivered after she'd turned the cold tap on him when they were sharing a candlelit bath. She'd clambered out, but he'd remained in the bubbly bathwater, eyes closed, chillaxing. Shocked out of the tub by the cold blast of water, he'd grabbed her and whacked her. Then he'd turned off the tap, pulled the plug on the water, and declared that she was going across his knee.

"Like fun I am," she'd said, looking down at the bright palm print on her thigh.

But over his knee she'd gone and it had been fun. He'd smacked her bare, wet-from-the-bath bottom twelve times, then rolled her onto her back and given her what had at that point been the best shag of her life. Afterwards, they'd lain contented on the bed, her head tucked under his left arm.

"Sex is always better after a spanking," he'd declared.

"Both of us," he'd grinned. "You were drenched and I'm not talking about the bathwater."

"Bastard!" Half-annoyed and half-embarrassed, she slapped his arm.

"Stop that," he said, stern. "That's my job." He sat up, hauled her across his lap and gave her backside another six sharp smacks.

It was too embarrassing to admit it, but yes, Lucy was. Spanking had been something she'd fantasised about for years. Schoolteachers had been the imaginary spankers in her childhood, followed by boys she'd fancied in her teens and later the handsome young men she'd met through work. She'd fantasised about being spanked by Noel, too, and the fact that he actually did spank sent shivers down her spine. Not that she could bring herself to admit it. Instead, she wiggled her bottom, hoping that would serve as the answer that she couldn't pluck up the courage to give voice to.

He'd chuckled and stroked her smarting buttocks and thighs. "That was just playful," he'd said. "You wait till you get a real spanking from me. I can guarantee you won't enjoy it at all."

At that moment she couldn't imagine not enjoying a spanking from Noel. But down the track she'd realised he was as good as his word.

She enjoys writing (and reading!) about strong-willed heroines crossing swords with alpha heroes.

Look for Bethany on Twitter @writerbethany1 or on the links below: