My last post for 2015 featured Heather Hart's first Spy Games book: Assassins. Today she's back with book 2 in this series: Stolen Love where stockings and a colt 45 are just tools of the trade! 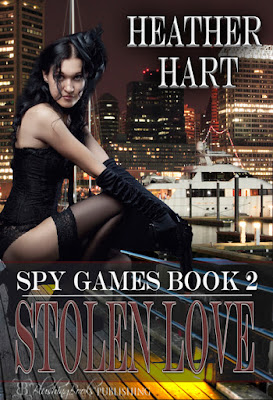 Amazon Buy Link Blushing Books Buy Link
When novice spy Kassie Shannon is given the chance to blow the lid off a human trafficking operation, she jumps right in, feet first. The front man for this criminal operation is a Brit called Alex Weber, a high-flying billionaire playboy with a thing for beautiful women and yachts.
Forever a champion of the neglected and abused, Kassie will do whatever it takes, including using her own body to bring this wealthy slime bag down. Knowing Alex is expected to arrive at Baltimore’s Inner Harbor, she and her partner devise a plan to flush him out into the open. She and Robert Redmond sail down in their small boat to meet Alex.
Although he is her master in the bedroom, Robert can’t help but accede to Kassie’s every whim outside it. But he has met the charming yet ruthless Alex before, and knowing what he is capable of, he fears Kassie may be in over her head.
He sets a close watch on her, but even he can’t be with her twenty-four hours a day. There is always a chance she might slip through his fingers the second his back is turned. And if the amoral, sex-trading Alex manages to get his hands on her, the love of his life could be sold and lost to him forever.

Did she know he was a spy, or did she just think him a concerned lover? If the latter, she would have no idea of the skills at his disposal. He hoped it was the latter. He raised his hand to his head.
"May I?"

She nodded, and he removed the wig and mustache.

"Great improvisation I must say. I was very impressed."

"Why? You're not going to the same place. Why don't we just sit here for a moment and enjoy each other's company? Maybe see the second half of the show?"

"What's so special about her? You and I fucked and, as I recall, it was pretty good, as fucks go. Why her? I doubt she's any better than me between the sheets."

Fucking women scorned. "Chemistry. You were a good technician, but there was no love, no heart. Kassie is all heart."

"Huh. What do men know about love? It's all sex to them."

"Really? You should read poetry. You might gain a better understanding of the opposite sex."

Author Bio
Heather Hart is a British author who lives with her family in Maryland. She’s a writer of hot erotica and romantic fiction – an eclectic mix of innocence and dirt in a hyperactive imagination.
When she’s not frantically scribbling away she’s a cat worshipper and curry fanatic. If you like what she writes, please feel free to drop her a line at authorheatherhart@gmail[dot]com.