The Murderess ~ By Allison West


Women that leave the royal harem, cast out by a Prince of Brayleigh, are sent into the Courtesan Slave Trade. Prince Aaron wants nothing to do with his father’s dark dealings and sinister ways. Sneaking his beloved women away each month is a tedious task and poses great risk.
With no choice but to choose a woman to leave the royal harem, Aaron needs time to think. He evades the guards and his father’s clutches on an adventure outside of the palace.
Love blossoms and danger lurks as Prince Aaron is forced to return home. Can he disrupt the Courtesan Slave Trade or will the courtesans find themselves in a fate worse than hell?
A dystopian erotic adventure featuring a kick-ass heroine and a virtuous prince.


Courtesan Slave Trade is a spin-off series featuring Prince Aaron of Gem Apocalypse by Ravyn Rayne. This book begins two days before The Emerald Virgin. It can be read as a stand-alone but will be enjoyed even more by those that have read The Gem Apocalypse saga. 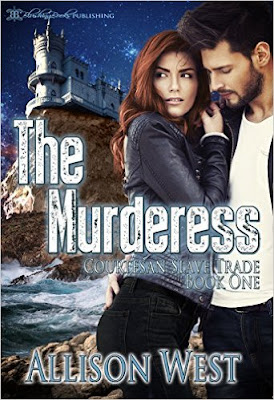 He needed time away from the palace. With twelve gorgeous courtesans that gave him everything he could desire, who would he send away? He tried not to think about the life they'd be subjected to. It wasn't a secret that the women weren't sent home to their families. The Courtesan Slave Trade had prospered tremendously and the thought made Aaron physically ill. Most courtesans found themselves subject to the black market, traded as a slave for the most affluent buyer, unless other arrangements were made. His girls deserved a better send off.
For months he'd been forced against his wishes to choose a courtesan to leave the palace. Though difficult, he'd chosen the older and least desirable to him, preferring young virgin women. He'd snuck the girls out during the night, helping aide in their escape. They deserved to be happy. If King Gideon ever discovered what Aaron had been up to, the punishment would be atrocious. Aaron would have to make sure no one said a word. He could trust his older brother James, but August would take any chance he had to get on his father's good side. Aaron didn't know how Henry would react. His brothers all enjoyed the monthly allotment of women and the royal harem.

About the Author
Allison is a sassy, fun-loving, and adventure-seeking young woman. She loves to travel and can’t wait for her next vacation.
Allison writes romantic erotica. She began writing romance novels in college, spending herdown time either reading a book or writing fiction. Please don’t make her choose between the two, she loves them equally.
Allison West also writes under Ravyn Rayne and Ruth Silver.
Spanking Author | Blog | Facebook | Twitter | Amazon | Tsu | Goodreads