Can true love tame a rogue?

I've really been enjoying Lee Savino's Rocky Mountain Bride series and here she is back on my blog again with her latest release: Rocky Mountain Rogue! 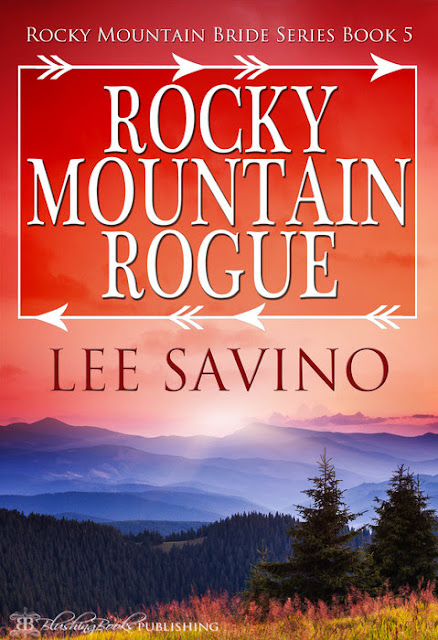 On her way to marry a man she’s never met, Susannah’s stagecoach is robbed by a tall, dark-haired outlaw.  When she tries to stop him, her struggles only lead to a humiliating bare-bottom spanking at his hands. Eventually, he lets her go, but she can’t stop thinking of him, even dreaming about him right up to her wedding day.

In fact, her new groom looks a lot like the black-haired rogue…

Jesse Oberon Wilder made a bet with his brother that he could marry by summer. That gives him enough time to carry out his plan to destroy the man who’s threatened his family. But when his plans lead him to rob his mail order bride’s stagecoach, he realizes that not everything can be solved by riding a horse or shooting a gun.

Will Jesse’s plans of revenge cost him the woman of his dreams?

This stand-alone book is set in the 1860s Wild West and contains domestic discipline scenes, including over-the-knee spankings with a hand and a quirt.

The Rocky Mountain Bride series follows the lives of mail order brides and the strong frontier men who take them in hand.

Excerpt:
"What is this? You villain! Untie me at once."
Deciding he didn't like the haughty tone in her voice, he turned her over his lap and smacked her bare cheek. She yelped and stilled.
Jesse like that reaction so much he did it again, then took a fist of the dirty blonde hair and pulled her head up slightly. "Do as I say and you won't get hurt."
She grimaced and he tugged her head back further, his grip a little tighter.
"Do you understand?"
"Yes, sir," she whimpered.
Jesse paused at the breathless answer, then decided he liked it. "Good."
He became aware of her curvy body pressed up against his, and almost groaned when she wriggled against him. It'd been too long since he'd had a woman. He'd abstained ever since he'd invited his bride to meet him in Colorado Springs. And now here was a lovely piece of calico just like he liked them, bound and half undressed.
A snort from his horse reminded him of his mission.
"Stay put," he told the lovely baggage, and deposited her on the ground.
"Damn you to hell," she said.
"Such fine language for a lady," he tutted. "Someone should teach you manners."
Out of the corner of his eye, Jesse saw the driver nodding in agreement.
Well, no one said business couldn't be pleasurable.
Instead of rising, he grabbed the lady's arm and hauled her up over his lap. As she squawked and started to kick, he delved under skirts and, finding a pair of split seam drawers, parted the layers of cloth and found her pretty cheeks, enticingly pale. They wouldn't be for long.
He smacked her rump once, and felt her struggle to free herself. Her hands were tied before her, so she couldn't manage to reach back to protect her bottom. Jesse caught her bound wrists anyway, and held them out in front of her. He drew his thigh over hers, weighting her so she couldn't kick her feet. The woman stilled under him, as if realizing she was completely pinned at his mercy.
"That's better," he chuckled, and brought his hand crashing down over and over again.
She screamed and kicked and flexed her hands in their bonds.
Jesse felt himself grow impossibly hard, and gritted his teeth. What he wouldn't give to be able to smack her bottom rosy, then set her on her knees and order her to use her mouth to please him, while he pinched her nipples to teach her.
"This will teach you to mind, little lady."
She growled in frustration, writhing with all her might, and he redoubled his efforts until she settled down. Her bottom cheeks warmed to a delicious red before he stopped.
"That should do it, for now. I pity the man that takes you in hand for the rest of your life."
He gave her a final smack and tipped her off his lap. She settled on her knees before him, glaring up at him with her dress almost sliding off her shoulders, and angry tears coursing down her beautiful face.
"Stay," he ordered, like she was a dog, and left her kneeling in the dust.

Check out her website to download a free novella or to say hi: www.leesavino.com. If you leave a review, email your name and the review link to silverwoodpress@gmail.com to get a free make out scene with the hero of your choice.