What do you do when you fall in love with the son of your family's sworn enemy?


Bonnie MacDonald lives on the wild and beautiful Scottish Isle of Skye. Her life is peaceful enough, apart from the ever-simmering feud between the McDonalds and the McLeods, who live to the north of them. But now her father is going to die, and it is not to be a Highlander's glorious death in battle, but an underhanded assault in the dark by a traitorous servant. That same treacherous fiend had once come after Bonnie, but at the last moment she was rescued from violation and murder by the one man she cannot show gratitude to, the son of her family’s sworn enemy, Rory Mòr MacLeod.


And yet she falls in love with her rescuer, and he with her, and there never were two more star-crossed lovers. Neither family will readily accept a union between them, but Rory does not give up on making her his own, though Bonnie often misconstrues his intentions. Matters are further complicated when they discover that Bonnie’s guardian harbors a secret passion for his beautiful young ward, and soon claims her for himself.


But everyone’s plans are foiled when another suitor for her hand kidnaps and whisks Bonnie away to a lonely house in the north of Skye. Her only chance is to flee her captor and seek sanctuary in Rory’s castle at Dunvegan. But while Bonnie fights for her own survival, the battling clansmen bring their families to the brink of war, and all for the love of the same woman.


Hold Fast is a historical romantic suspense novel; it is also a sweet romance with no illicit sexual liaisons. The story is based loosely on real events leading to the Battle of Coire Na Creiche, also known as the Wars of the One-Eyed Woman, fought on the Isle of Skye in 1601. 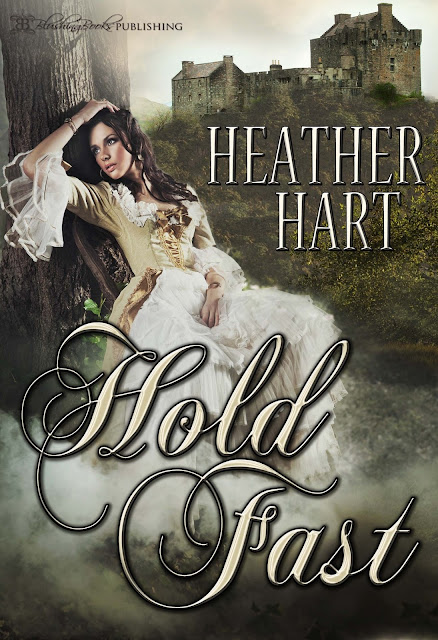 Excerpt:
It wasn't that I disliked Rory Mòr MacLeod. What I felt was more akin to pure hatred. I watched as the boy my cousins and I had all called the wee terror of the glen skipped along the banks of the Sound of Sleat as if he owned them. My stomach turned. My father warned me not to mess with the MacLeod scum, and I knew his warning was not without cause. Rory was the favorite son of his father, and the MacLeod clan had been warring with my family forever. What's more, I had cause of my own, for the spoiled brat liked nothing better than to tear my skirts and pull at my braids.
He scampered along, driving an ancient, scrawny cow ahead of him. Rory held his head high, like a strutting peacock, all the while urging the decrepit beast on from the lush green pasture located a short distance from the shore. I had no time to spare for the black-haired, black-fingered, ill-mannered ruffian that he was, so I turned away, pretending I hadn't seen him, and carried on with my work.
"I see you, Bonnie MacDonald. 'Tis a fine day, is it not?"
"Aye, it was, before you came along, Rory Mòr MacLeod."
He paused, a cocky grin spread across his young face, and he leaned upon his staff and looked down at me. "Now that's no way for a lass to talk to a Highland clansman."
"Away with you, you gormless fool." I looked at the poor beast at his side, noting the sharp contours of her bony ribs. "I see that your betters have entrusted you with the pick of the MacLeod crop. It would be better to put that poor animal out of her misery, would it not? What are you thinking, driving such a wretched thing this far south and in this heat? 'Tis a wonder she doesn't die of old age before she makes it home."
He shrugged and watched as I continued to wash the wool in the sea. I kept my head down, hoping he would go away, afraid he would set on me as he had so often done before and make me cry. His silence made me uncomfortable.
"What are you doing so far from the safety of Dunvegan? These lands were taken from you long ago, you've no business here now."
He looked across the land to the distance peaks of the Red Cuillin. Swinging on his staff, he addressed me as if I were still a child.
"A traveler has the right of passage, whichever way his path takes him, does he not? If you must know, the cow is old, and belongs to a kinswoman who lives not too far from these parts. She bade me slaughter her, for she could not. I'm taking her to the market in Saaisag, as I'll get a fair price for her there. As you see there's not much meat on her bones, but she's added plenty of calves to my aunt's stock over the years; so don't judge her by how she looks now, Bonnie."
"It's not the cow I'm judging. What is your aunt thinking, living this far south, so far away from the protection of her kinsmen?"
"The MacDonald's have their people in the north, do they not? Or would you draw a line across the island and keep everyone in their proper place? Any road, if it were not for my childless aunt’s love of me, you would like as never have had the good fortune to meet me. Many a summer she begged me play at her heels, to drive out the loneliness in her heart. I was glad of it. She’s a fine woman, and I do whatever I can to ease her burdens, no matter how far beyond the castle wall she lives."
I looked up, my hands still in the cool water as I scrubbed the freshly cut fleece. There was a swagger about him I didn't like and I wished with all my heart he would go away and leave me to my business.
"Look, is there something you're wanting or are you going to make that wretched cow stand in the sun all day?"
"Ah, well, she'll be well enough, I'm thinking. I was wondering about your good cousin, Donald? He has been the talk of my clansmen of late."
My eyes narrowed suspiciously. "I can tell you he's not been asking after you. Why would he? Are you up to more of your treachery, Rory MacLeod? Do you and your clansmen have nothing better to do than continually plot against mine?"
"Oh, our business would be nothing to a wee sprite of a lass like you." He cocked his head to one side. "You look different. Your hair? You used to braid it."
"I'm not a little child anymore."
"No, Bonnie, I see that you're not."
Author Bio:
Heather Hart is a British author who lives with her family in Maryland. She’s a writer of hot erotic and romantic fiction – an eclectic mix of innocence and dirt in a hyperactive imagination.

When she’s not frantically scribbling away she’s a cat worshipper and curry fanatic. If you like what she writes, please feel free to drop her a line at authorheatherhart@gmail[dot]com.