~ The Stolen Bride ~ by Jaye Peaches ~

I'm a huge fan of Jaye Peaches work and she's here on my blog today with her new release The Stolen Bride that sounds fantastic! My TBR list is getting very long!

Thank you for inviting me to your blog. I’m sharing an excerpt from my latest release – The Stolen Bride – a medieval romance that tells of Nadia’s arranged marriage to a Norman baron. The virgin bride isn’t quite as pure as he believes her to be, but that doesn’t dissuade him from his plan to give her to another man on their wedding night.

Eighteen-year-old Nadia loathes the dreary routine of life in a convent, and though sneaking out risks earning her a firm chastisement with the prioresses’ birch, that is a small price to pay for a taste of freedom. When her father gives her a chance to leave the convent behind forever if she weds Lord Arnaud, the Baron of Uxley, she agrees to the arrangement, certain that even marrying a man twice her age is better than taking vows as a nun.

To Nadia’s shock, however, after a handsome adventurer named Edgar saves Lord Arnaud from a band of murderous robbers, as a reward for his courage Arnaud invites his rescuer to both the wedding and the wedding night. Knowing that his love for his late wife will keep him from properly consummating his new marriage, the voyeuristic baron would prefer to watch Edgar claim Nadia himself.

But when Lord Arnaud becomes convinced that Nadia has been lying about her purity, the young bride finds herself stripped bare and blushing crimson as she is made to submit to an intimate, humiliating examination in front of both Arnaud and Edgar. The exam confirms her deception, and she is punished with a painful, embarrassing spanking on her bare bottom before Edgar takes her long and hard in front of her new husband.

Despite Nadia’s shame at her body’s response to Edgar’s dominance, she can’t help wondering what it would be like to belong to him completely. But when Edgar ties her up and steals her from the baron’s home, intent on keeping her as his own, will Nadia seek to escape him or will she embrace a new life on the run as his stolen bride? 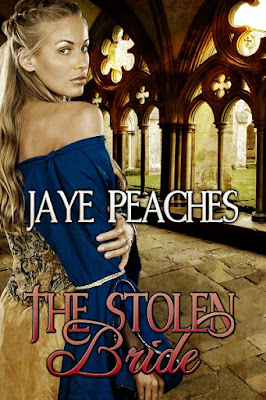 And a sexy spanky excerpt:
Edgar wasn’t entirely sure he was displeased. In fact, he struggled to hide his erection. Witnessing the spanking of Nadia, especially the humiliating position of her bottom up in the air and her head between Arnaud’s legs, had given him a painfully swollen cock. Perhaps Arnaud’s pleasure in voyeurism wasn’t as strange as it sounded.
Yes, she’d lied, but not actually to him. Arnaud had expected her to reveal the truth to him before the wedding, but given the high regard her priory had placed on virginity, her reticence to reveal the truth was understandable. On the other hand, she shouldn’t lie to her husband. He helped her to her feet. Her bottom was glowing and he wanted to feel the warmth, and what lay between her legs.
However, he’d been promised her virginity and she’d not admitted to losing it, so maybe he was justified in spanking her. Damn it to hell, he would spank her regardless because they both needed to address her behaviour and put an end to the matter.
“Come over here,” he told her. He led her toward a stool. Having sat on it, he drew her over his lap. “A good hard spanking is what you need, isn’t it?”
“Yes, sir,” she whispered.
“So, don’t be expecting me to ease up if you start hollering.” He wondered if that sounded too harsh, but when she wriggled her bottom at him, he decided probably not.
He lifted his hand a little too high above her rump, so he lowered it and brought it down on her rosy cheeks with a smack. She didn’t make a noise or stir from the position over his knee. He raised his hand again, higher and brought it down quicker.
She yelped and flattened her hips against his lap, as if to lower herself away from his hand.
Somewhere in between, he guessed. Now he had a measure of the technique, he proceeded to smack her bottom with a rhythm. He also discovered the art of pausing and rubbing. He circled her left cheek, felt the heat rising up and traced the shape of her perfect contours. This he could enjoy many times. He held her tight about the waist and while she paddled her feet on the rushes, he walloped her bottom.