When I was a kid there was this really neat Gymnastics series for girls that I loved to read. I used to insert my own spankings scenes in (just in my head, of course). Now here we have it - gymnastics and spankings!!

Blurb:
Nineteen-year-old gymnast Wren Montgomery was America’s golden girl, but then it all came crashing down. As far as the media is concerned, it was a devastating ankle injury which began her downward spiral, but in her heart Wren knows better. The truth is that things started going wrong the day her beloved coach Jonathan Reilly not only rejected her romantic advances, but actually spanked her bare bottom as if she were a silly little girl when she tried to hide her heartbreak behind an angry outburst.

Now at twenty-two, after one poor decision after another Wren has become the “bad girl” of the gymnastics world. Desperate to break out of her slump and with nowhere else to turn, she decides to accept help from the best coach she ever had… the same man who spurned and then spanked her years ago.

Jonathan watched Wren’s fall from grace, and he fell with her. He still blames himself for leaving the team—and more importantly, leaving her—and now that he has the chance to help his little rebel get back on track, he isn’t going to let it slip through his fingers. This time he’ll be there for her no matter what, both when she needs a loving embrace and when she needs a firm hand applied to her bare bottom. Most important of all, if she still wants him to be more than just her coach, this time he won’t let anything keep him from claiming what is his. 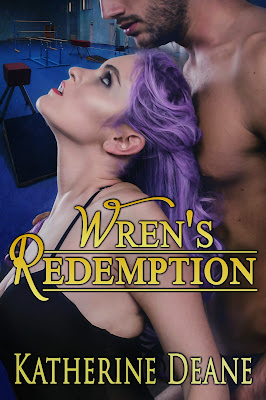 Jonathan couldn’t stop the shit eating grin as he plunked down on top of Paul’s desk. Yes, that little spanking had fueled a lot of memories and fantasy fodder, over the past three years. Her creamy flesh jiggling up and down, as he imprinted her with his red splotchy handprint. Granted, that had been extremely inappropriate. So had the thoughts he had had toward the then nineteen year old athlete.  It was a smart move for him to take a break from the team. But if he had stayed, Wren wouldn’t be in the position she was in now. Falling from grace must have hurt her pretty bad. And it looked like she was still very angry. Her lips pursed, her blue eyes blazed, and if her arms squeezed any tighter around her chest, she would asphyxiate herself.
“Did you hear me, jackass?” she spat.
“I heard you loud and clear, sweetheart. And it sounds like you are itching to go back over my knee again, right now.” He took pleasure in her soft little gasp as her eyes widened and her cheeks blushed. He had always been able to fluster her, and he loved how easily she showed her emotions. She hadn’t changed a bit. Well, except for filling out a little more up top, and the hardened look in her eyes. He would fix that.
He leaned into her personal space, and listened as she took in a quick nervous breath. Grasping a tendril of her long hair, he twirled it around his finger a few times. “I like the purple. What’d your folks say?”
She caught her bearings, and yanked away from him. “What do you think?”
He was sure good old conservative Mr. and Mrs. Montgomery had had fits. He wondered how much of her lashing out was for the media, and how much was directed at her parents. “Well, it suits you and your personality.”
She rolled her eyes and snorted, sitting back against the chair stiffly. “What’s that supposed to mean?”
He knelt down to get at her eye level and grasped her chin, “It means you haven’t given up yet. You’re stronger than they gave you credit for. And you are going to prove it to them when you make the national team in four months.”
Her eyes softened and he finally received a glimpse of the former Wren Montgomery, the sweetheart with the heart of gold. She sniffled. “Who’s them?”
“The whole world, sweetie. Including you.”  He let go of her chin and sat back on the desk, folding his arms and piercing her with a firm gaze. “But first, we need to get you through your last bit of PT, and you’re going to need a coach.”
“Are you going to act like this the whole time we are together?” Her brow furrowed and the pink flush spread to her ears.
“You’re asking if I’ll spank your bare bottom again.”
Her small squeak of embarrassment assured him he had all of her attention, even though she wouldn’t meet his gaze. It had worked three years ago. Why not?
“Yes, my little rebel, I’m going to work your ass harder than you have ever trained before. And when you give up, or don’t give your all, or give me too much attitude, I will punish you. And I promise you, when we are done, you will be the best “bad girl”, gymnastics has ever seen.” He stood up and held out his hand. “So what do you say?”
Her grip was stronger than he had anticipated, and Jonathan schooled his features not to wince, as she flashed her brilliant white teeth at him. “When do we start, Coach?”

About Katherine Deane:
Katherine Deane is a multi-published, top 100 romantic and BDSM author and romantic at heart.
She loves cheese, red wine, chocolate, and snuggling up with her daughters’ kittens while reading a good book.
When not reading, or writing, you can find her knitting, sewing, crafting, or doing pretty much anything to keep her hands busy. She has taken over the dining room AKA craft room, much to her husband’s dismay. In one of her books, an energetic “craftaholic” would find herself over her husband’s knee for losing an important document in a pile of bi-cone crystals and mod podge. Her real life, and the people in them, give her plenty of ideas to work with.
Katherine has dubbed herself the queen of cheese. Not only is she a former Midwestern Cheese Head; she also loves to incorporate it into her books.
In her opinion, all romance deserves at least one cheesy scene that makes you cry.
You can catch up with her at:
http://katherinedeane.wordpress.com
Twitter
Facebook