In Deep Water ~ by Anita Philmar

Anita Philmar is on my blog today with her featuring this great tagline:

Almost drowning reveals a whirlpool of emotion that won’t be satisfied by anything less than complete surrender.


Skinny-dipping to cool off in the Trinity River couldn’t cause any problem...could it?
Wading into the water, Carolyn Evans takes one step to far and finds herself neck-deep in the river and fighting for her life.
After saving Carolyn from drowning, Zack Goodman is trapped in an awkward situation when they’re both rescued by a steamboat and hauled on deck.
Naked and embarrassed, Carolyn is quick to save them from humiliation and claims they are married.
Will Zack release her from her claim of matrimony? Or will he teach her once words are spoken...they are not so easily retracted? 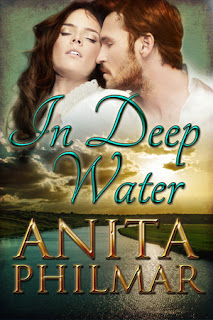 Something cold brushed his forearm, and then a foot hit his thigh. He grabbed for an arm as a clinging body wrapped itself around him. His head sank beneath the surface and he fought to disengage the grip of the other person. Drowning victims didn’t understand they needed to allow their rescuers room to move.
He kicked his legs, and his head broke the surface. A wad of hair blocked his sight. “Easy now, you have to loosen your hold or we’ll both drown.”
The fingers around his neck loosened, and he eased back to stare into frightened dark eyes. Fear had drained the woman’s face into a mask of white. He kicked his legs in a repetitive motion to keep both their heads above water.
“Now listen carefully, just relax. That way you’ll float, and I can drag you ashore.” Zack worked his hands along her side and offered reassurance. “Trust me, together we’ll make it through this.”
“Okay, but don’t let me go.”
Her frighten tone vibrated through his head.
“Don’t worry, I won’t.” Zack edged away from her and lifted her body. Round firm breasts bobbed briefly above the water’s surface. He marveled at the sight and his hands slid to the curve of her hips. No clothes inhibited his path. His body responded to the close proximity of her naked body. The snug fit of his wet pants bit into his growing erection. “I, uh...think we better get to moving.”