My story is called Subdued by the Lifeguard.
He’s a surf lifeguard, paid to rescue and protect. Can he give her the discipline she craves?

“If you were mine I’d turn you over my knee right now and spank you until you couldn’t sit down.”
Heat shot through her loins at that statement, a tingle starting in her breasts, tightening them, swelling them, and travelling down her body, igniting an aching need deep in her pussy. Her buttocks clenched involuntarily as relief flowed through her. She’d read him right.
“Would you?” she asked him, smiling, her green eyes sparkling.
He nodded. “I would.” He looked stern, but underneath that stern façade, he, too, was smiling.
“Go on then,” she dared him, winking, a twinkle in her eye.
Smack! His large hand smacked against her bikini-clad bottom, hard enough to impart a slight sting, especially on her wet skin, but still light enough to be playful. A thrill went through her.
At her shocked gasp, he leaned down to whisper in her ear. “You are a very naughty girl!” he scolded. “You need to obey the lifeguards and swim between the flags.”
“Yes Sir,” she whispered, naturally submissive, her eyes downcast. Her heartbeat raced, her breathing was ragged.
“Would you like me to show you what happens to naughty girls who disobey lifeguards?” he whispered seductively, his eyes flashing with desire. 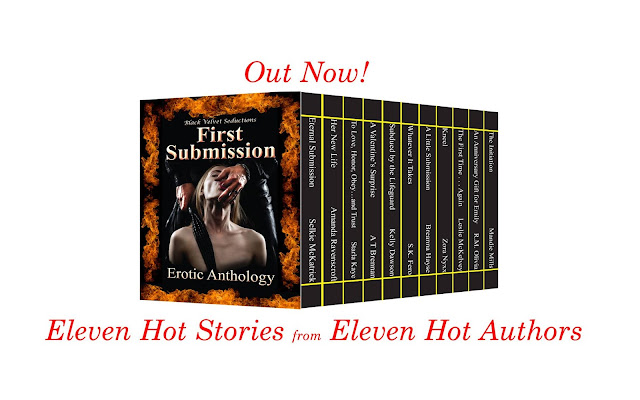 Buy it on Amazon


Subdued by the Lifeguard: Zane’s a surf lifeguard, trained to rescue and protect, his watchful eye never missing a beat when it came to safety. His dominance flowed like the waves over the sand, drawing Lisa into its wake and daring her to challenge him. Would she risk drowning just for the chance that he could make her obey? That is - if he would save her!

Eternal Submission - Selkie McKatrick: Do you believe in reincarnation? When Dorrie Westbrook submits her heart and soul to Eli Richardson, she can’t know that she’ll be bound to him in another life. But Dalton recognizes Lavender as his eternal soul mate and submissive the minute she re-enters his life. If love truly is eternal, then beware before you submit to its power.

Amanda Ravenscroft: Her New Life: Christie has been successful at work but there is something missing from her life. She has become aware of a need to submit. Her submissive side takes her thoughts back to an early spanking that awakens her need for a dominant. Gerard Nyman is an old fashioned dominant, who believes in consent, respect and compliance. Will her need and his strong will be the start of something beautiful?

Mandie Mills: The Initiation: After accepting a mysterious invitation to a private kink club, Felicity’s domination and submission fantasies come to life in an adventurous evening of blindfolds, bondage and double penetration that includes a handsome stranger. R.M. Olivia: An Anniversary Gift for Emily Discouraged by the lack of spark in their marriage, Emily’s husband breaks into her diary to discover her hidden secret- a menage! Would she be open to an interracial adventure with their sexy Latino neighbor? There is only one way to find out… LESLIE MCKELVEY: The First Time… Again Can Lila summon up the nerve to tell her easy-going and laid back boyfriend what is really on her mind? How would he receive her request to take charge and command control, tie her up and even spank her! She longed to submit but was he prepared to dominate? Once asked, there would be no going back. ZORA NYXX: Kneel Her marriage had fallen to the mundane, everyday life that left Lydia feeling empty and joyless. She needed a second chance to live again, clear on the other side of the country where she met Thorton- a powerful and dominating man who was not only able to awaken her sexuality, but also claim her heart. That is- if she could bring herself to kneel before him. BREANNA HAYSE: A Little Submission Sharli’s no angel and her childish defiance has landed her in the police station on assault charges. No amount of weaseling is going to stop her alpha male boyfriend from showing his love for his Little girl by putting her straight over his knee for a shocking bare-bottom spanking. It’s not until after he comforts her in his strong, loving arms that Sharli realizes that she needs more than just a dom… she also needs a Daddy.

S.K. FERO: Whatever It Takes Relationships are hard enough, but when an ultimatum is added, things become hot. Will one dominant cowboy give his submission to the other in order to keep their romance alive?

STARLA KAYE: To Love, Honor, Obey… and Trust He ordered her to take off her panties. Why? “Because I told you to do it. Because knowing you are sitting at your desk with a bare bottom, which will be spanked later, will make you less likely to act pissy to your staff today.” Did Abby believe that he would really go through with his threat? More so, could she trust him to give her exactly what she needed. She would soon see…

Don't forget to check out the other participants in Sat Spanks this week:
Posted by Kelly Dawson at 18:30

Email ThisBlogThis!Share to TwitterShare to FacebookShare to Pinterest
Labels: Anthology