Sunday's Six of the Best blog hop is where authors share 6 paragraphs of a hot release or WIP.  I'm going with a WIP this week - this book is set in a New Zealand racing stable and my heroine has Tourette's - just like me! It's currently being edited and will be due for release later this month!

First of all, let me share one of the pics I used for inspiration: 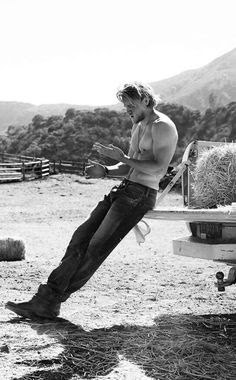 And here's my excerpt: (sorry I cheated again, this is a bit longer than 6 paragraphs)

“Don’t look at me,” she murmured softly, but he heard every word.
“Why not? You should be used to guys looking at you.”
“Oh, I am. Not just guys either; girls also like to look at me and mock.” Her voice was bitter, sad and wistful, and he instantly realised his mistake.
“Hang on, that’s not what I meant,” he objected, but he was too late. He noticed the look of fierce concentration that she always got on her face when she was trying to suppress a tic. He’d obviously upset her more than he realised. Idiot! he chided himself. “What I meant was, you’re beautiful! You should be used to being admired!”
She snorted and shook her head, but he noticed the half-smile she was trying to valiantly to hide. “No one admires me.”
“I’m sure plenty do.”
“They don’t, trust me.” She turned her attention back to the horse.
“I do.”
Bringing Rose to a stop, she turned and looked at him in surprise. “Why would you?”
“I just said – you’re beautiful.” His voice was soft as he spoke the words, but it was true – he did find her beautiful. Her eyes were always so sad, she seemed so vulnerable … and it was that vulnerability, that sadness, that appealed to him as much as anything else, and brought out the protective instincts in him.
“I’m a freak.” She said it so matter-of-factly, as though she truly believed it.
His heart broke at her declaration. “You’re not a freak.”
“Yeah I am.” Then she turned back to Rose, silently commanding the horse into a hindquarter yield.
Clay watched a bit longer, impressed by the natural horsemanship techniques Bianca was using to build the bond with the mare and make her body strong and supple once again. Although the filly wasn’t yet at peak fitness, now that Bianca was riding her daily, it wouldn’t take long for her to be in prime condition.
The longer he stood there watching, the more he felt himself attracted to her. He must have zoned out completely while watching her, because the next thing he knew, she was right there beside him, fiddling with the latch on the gate, holding Rose’s lead rope in one hand. Making the most of his opportunity, he reached out and touched her shoulder gently, looking deeply into her eyes. She avoided his gaze at first, but he kept his eyes steady and eventually she met his even stare with a level gaze of her own; a challenge.
“You are not a freak,” he told her softly, but firmly. “If you were mine I would spank you for speaking about yourself like that,” he admonished her.

Meanwhile, check out the other participants this week: