CHOSEN BY THE GOVERNOR by Jaye Peaches

I'm so pleased to have Jaye Peaches on my blog today sharing a super-hot excerpt from her new release: Chosen by the Governor.


Thank you for hosting me today. I’ve brought along an alien – Marco, the hunky tattooed governor of a distant penal colony.  He has a new prisoner. Freya has recently arrived from Earth and has caught his eye. Marco has chosen her to his, and only his, but first he needs to ensure she understands what he expects from her.

Blurb:
When she is caught spying on the alien empire which has conquered Earth, Freya is shipped off to a prison colony on the distant planet Tagra. Upon her arrival, she is subjected to a thorough, intimate medical examination intended to assess her response to sexual stimulation, and when she protests the humiliating procedure her bare bottom is soundly spanked.
Marco takes his job as governor of Tagra seriously and he is well-known among the prisoners for his firm-handed discipline, but from the moment he first encounters Freya he cannot keep the feisty Earthling off his mind. After taking it upon himself to personally oversee her initial exam, he delights in bringing the naked, blushing human to one quivering climax after another.
Though Marco quickly proves that he will not hesitate to punish Freya when she defies the rules of the colony, her burning backside does nothing to diminish her growing need for him to claim her and take her long and hard. She soon finds herself falling ever more deeply in love with the handsome, dominant alien who both demands her submission and brings her pleasure beyond anything she could have ever imagined, but can she dare to hope that Marco will one day see her as more than just his prisoner and his plaything?
Publisher’s Note: Chosen by the Governor is an erotic romance novel that includes spankings, sexual scenes, medical play, elements of BDSM, and more. If such material offends you, please don’t buy this book. 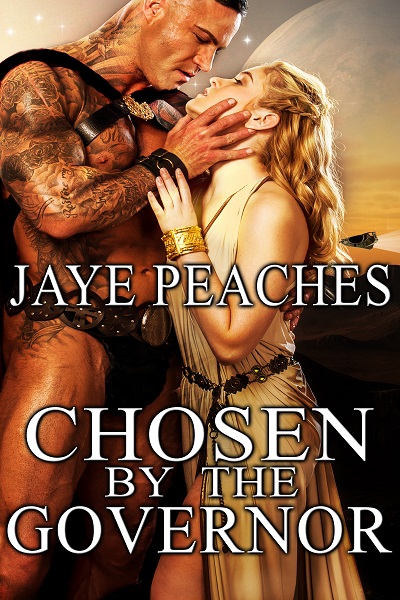 He circled around the desk, approaching her from the opposing side. She was balancing on the tips of her trembling toes and her knees were knocked together, locking her slit out of sight. He tapped her heels with the end of his boot and slowly nudged her legs back apart.

Such an ass. He’d admired many a fine ass in his time, but this girl had one that could take the crown for best ass. The lobes formed perfect semi-circles at the tops of her thighs—two smiles to greet him. The skin was smooth and until he’d spanked her, the color had been an even shade of pale pink. Now each buttock had a round red patch in the middle. His handprints had merged together exactly where he intended to strike with the strap. He’d prepared her well. Too little and the strap would be intolerable; too much and the rawness would break the skin’s surface.

“Please don’t hurt me,” she implored. She twisted her head around and looked over her shoulders with those startling eyes.

“I’m punishing you,” he reminded her. “Don’t expect this to be easy. You must remain in position. If you move excessively, I shall repeat the stroke.” He was resolved. He had to remain firm and consistent. It was the mainstay of his leadership technique—don’t deviate from a decision.

Her lower lip trembled, but she kept bent over and her legs apart. He positioned himself, raised his arm, and slapped the strap across both ass cheeks.

She bolted upright, cried out, and clutched her bottom with both hands.

He sighed. “That one will be repeated, Freya. Back down.” He pushed her between the shoulder blades, encouraging her to return to position. She whimpered, a little sound, but complied. He examined the mark—a single line had formed a welt. He traced his finger along it and noted it was hot, but the skin was intact. The next would strike a little lower.

He switched sides and whipped the strap across her rump with a backhanded flick of his arm.

Once again, she jerked, but managed to halt in time. “Better. That one will count.”

“I can’t do this,” she sniffed. “I can’t hold position.” She clawed at the smooth surface of the table. He understood. Her need to stand up was unintentional; a reaction, not a decision.