Discover what REALLY happens when young ladies misbehave at sea..

As a child, life for Jade was good until a family tragedy changes her forever. Despite the best efforts of her mother to keep her in line, Jade's future looked increasingly grim.
Head strong and wild, she eventually found herself on the wrong side of the law. A prosecutor who sees a glimmer of potential delivers her an ultimatum—she could go to jail or she could join the navy. A few short months later she has graduated from recruit school and looks forward to joining her first ship.
Despite the best of intentions, it isn't long before she finds herself on the wrong side of the naval discipline system.  Facing another choice—be discharged or agree to a course of discipline—she experiences the first of many somewhat unorthodox and definitely unauthorized punishments designed to bring her into line. What she'd never expected is that the unintentional consequences of those punishments also bring her to life.
The pain and humiliation of baring her body in front of others and being soundly spanked becomes something she craves. The day she sees one of the handsome young officers from her ship emerge from her place of punishment, her imagination works overtime. Why was he there? How could she get to know him?


They end up drawn together in a number of unintended ways and she finds herself falling hopelessly in love. Will he return her love and will he be able to deliver the discipline she can no longer live without? 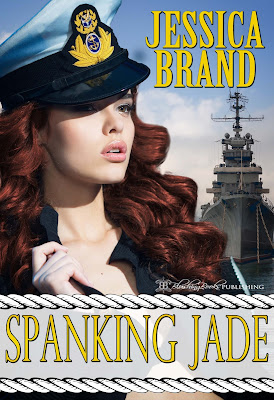 Facing a solid wooden structure, she saw it was constructed of black timber and had a number of horizontal beams on it, all of which were covered in padded red vinyl. Each beam had brown leather straps attached and Jade quickly worked out they were for restraining her.
"No, no, let me go," she cried out in horror as they dragged her, with little effort, over the structure. In no time at all, leather straps closed over her wrists and were inserted through the shiny roller buckles and pulled tight. She fought with all her might but the straps held firm, trapping her in their leather embrace.
Ignoring her protests, Damien and Caitlin spread her legs and lifted them onto the beams designed for them, quickly slipping the leather straps over her ankles and pulling them firmly into the padding, leaving her open and exposed. She continued to protest and fight as they attached the remaining restraints, each one reducing her range of movement further until she could do nothing more than squirm.
Caitlin stood back and admired their work. "Beautiful," she murmured as she grazed her fingernails lightly over Jade's taut butt cheeks.
Jade was already tiring from her exertions which were all in vain. "No, let me go," she protested as Damien squatted down in front of her to look her in the eyes. He was holding one of the straps with a big red ball in the center of it. "Jade, although the room is quite sound proof, I will have to gag you if you can't stop carrying on. What is going to happen will happen regardless." Bringing the ball up against her lips he said, "Open up."
She didn't respond and kept her mouth firmly closed as her protests lessened to mere whimpers. Holding the ball against her lips for a few seconds, Damien smiled. "Good girl," he whispered, his voice soothing but with an underlying steely resolve. He then moved slowly around her checking each of her restraints to make sure they were secure but not so tight as to cause discomfort or cut off circulation.
As he continued with his task, his hand never left her body, the warmth and strength of it providing Jade with an odd feeling of comfort. Here was the man who had helped restrain her and who had already told her he was going to punish her and yet she felt comforted by his touch. As he checked the straps at the tops of her legs, she felt him touching her inner thighs. She closed her eyes and found herself hoping his hand would drift a little higher, that he would touch her intimately.
Drift a little higher? What the hell? She didn't want that, did she? Maybe she did. She felt unsure, conflicted. Giving up her internal struggle for the moment, she opened her eyes and there was Caitlin, squatting down in front of her, lifting up her tight skirt for ease of movement. Jade couldn't help but admire the milky white of those exposed thighs before they disappeared inside skin colored panties. She even gave a thought to how soft and silky they would be to caress, how they would feel against her face. Her musing was interrupted when a piece of soft leather covered her eyes and Jade's world went dark. Her brain was saying, "No. Please," but the sound that came out was a muffled “Mmmfff.”

Jessica was born in Melbourne, Australia in 1958. Having lived in many parts of Australia and overseas, she now resides in Sydney and writes for fun.

With a lifelong interest in her subject matter she finally decided to put some of her experiences and fantasies into words, toning them down somewhat for public consumption. Her first book was released in mid 2014, using the pseudonym of R. R. Greaves. This was followed by a new release in Feb 2015 and there are a number of new stories in different stages of production.

For more exciting titles from this best selling author under this and other psuedonyms, go to www.rrgreaveseroticauthor.com and get some spice into your reading life.

Check out these other titles by R.R. Greaves

From Seduction to Submission