I am so pleased to host fellow spanky author Constance Masters on my blog today, sharing her hot new release Trickery!


Blurb: Morgan King is a 23 year old virgin who has never had a proper boyfriend. The fussy young woman longs to meet a man everything like the heroes in the spanking romance novels she loves to read. When such a man comes along, Morgan is sure that he must be too good to be true and balks at actually meeting him.

Jackson Brooks is a 29 year old middle school teacher who works summers at his family’s summer camp. When he gets to know Morgan on an online dating site, he is sure she’s the girl for him. They are both ready to settle down and he doesn’t understand why she is so hesitant to meet him in person. His confusion deepens when he finds out she has sent him a fake photo; he is not happy. With his job as director of the summer camp looming, he decides to give the elusive Morgan some  space.

Morgan is devastated when she realizes she has probably blown things with Jackson. The desperate young woman hatches a plan to get to know him secretly. She pretends to be her own mother and books herself into Sunnyvale Summer Camp under the name of Alyssa King, using her sister’s birth certificate. What will happen when Jackson finds out?

And here's a great spanky excerpt, with a very imaginative implement! I don't think I'm ever going to look at blinds in quite the same way again!

Jackson stood and walked around to her side of the desk. “Stand up.”
“What are you doing?” Morgan’s eyes were wide with disbelief but she did as he asked.
“Bend over the desk.” He moved his things out of the way and stood back while she bent over. “Stay there.”
“What are you going to do? You can’t really mean to spank me, not here. Someone will hear you!” Morgan shifted nervously, her fingers automatically tugging at the frayed hem of her shorts.
“They won’t because you will not make a sound. You are going to take what you have coming to you and you are going to be completely silent. Not one little whimper because you know you deserve every single lick.” Jackson was angry and he had to decide what to do but there was no way he could even think straight until he’d metered out at least some punishment. It was nothing compared to what he wanted to do but he had to bear in mind there were kids on the property and for the most part he had to concentrate on them. This bottom warming would have to be quick and sharp.
“But I?” Morgan squirmed uncomfortably.
“The only butt I’m interested in is the one I’m about to punish. Stay in that position and wait.” He was surprised that she did as he told her. Jackson locked his office door and walked through to his adjoining sleeping quarters to find something to spank her with. He needed something with maximum sting and yet whisper quiet. He had to remember that as far as the other councillors knew, he was holed up in here with a teenage girl. If they heard any kind of slap they could call the police and both of them could end up in jail. He took a belt out of his closet, folded it and cracked it across his palm. The sting was considerable but it was not noiseless. Could he use a rubber flip-flop? Nope, the slapping sound was distinctive and quite loud. Finally he grabbed the tilt wand from the blinds and flicked it across his hand. Perfect. It packed a good sting and was completely silent.

When he walked back into the office he was pleased to see that Morgan hadn’t moved. That was something. So her name was Morgan King. At least he could put a name, face and very soon, smacked bottom to the person he’d been talking to, at last.
“What’s that?” Morgan asked, her head shooting around and her jaw dropping with shock when she saw what he was holding.
“Bend back over.” He pressed her down slightly and pulled at her light shorts until they were buried within her crease. This left a pleasing amount of her naked butt cheeks on show.
“I’m scared,” Morgan whimpered into her arm.
“Good, you deserve to be scared.”
“I’m sorry Jackson, I really am.”
Jackson had to steel himself. “I’m going to spank your sassy, dishonest behind hard with this, plastic whatever it is, because you have put both of us at risk of being in terrible trouble with the law. You haven’t even had a criminal record check. My brother and sister in-law could lose their business. All because you didn’t think about anyone but yourself.”
“And I’m not a criminal!”
“I didn’t say you were but it is against the law to work wth kids without the proper checks.”
“I just wanted to get to know you.” Morgan was crying and he hadn’t even smacked her yet.
“There were better ways than this to get to know me.”
“I can see that now!”
“Hush,” he whispered.

Jackson raised his hand and brought the fiery little stick down hard across both plump cheeks. He would have loved for the first time he spanked this woman to have been with his hand. He wanted nothing more than to feel those soft cheeks ripple beneath his bare hand. He so wanted to hear the satisfying clap of flesh meeting flesh. He brought his chosen gadget down again, a little lower than the first pink line.
“Please Jackson,” Morgan begged quietly. “It hurts.”
“It’s not supposed to tickle Morgan. Honestly, you are so lucky that I can’t give you exactly what you deserve or you would be getting a thorough hand spanking followed by a few licks of my belt.”
“I’ll do anything you want if you stop, please.”
The whippy little plastic rod danced up and down her soft white flesh and she was dancing on her toes to ease the sting. “Keep still Alyssa,” he whispered. “You know you deserve this.”
“But it burns—and my name is Morgan.”
“Good, I hope it keeps on burning Morgan.” He hoisted her up by a handful of shorts and made sure he covered the area that usually remained hidden in the crease. He didn’t want the effects of this spanking to wear off too soon. Finally he put the wand down on the desk and pulled her shorts back into place to cover her bottom. She looked adorable; both hands were rubbing her sore bottom while she stood there with her messy hair and her tear stained cheeks looking completely contrite. He wanted nothing more than to hug her and kiss away her tears.
“That hurt.”
“I hope so honey.” He pulled her against him for their first ever, real hug and he had to admit, it felt good to hold Morgan in his arms, if only it was under better circumstances. “Enough, I need to figure out what to do next.”
“What are we gonna do?”
“Good question and when I decide I’ll let you know.”
“Fine, don't let me interrupt your thoughts on what I am going to be doing.”
“Hush Morgan, I need to decide quickly what to do about this,” Jackson said. “Whitney is going to be expecting me to have you removed.”
“Oh well we have to do what makes Whitney happy.”
“What do you mean happy? This isn’t about making Whitney happy it’s about Whitney knowing what the rules are and expecting me to follow them.”
“Does she even know what was in the bag?”
“No, I asked her to bring it to me. Councillors don’t have the authority to search bags.” He was starting to realize that they were the only two that knew about any of this.
“This is about me. At least I should have a bit of a say about what we do next.”
“Deciding what’s the right thing for everyone though isn’t easy and I’m the adult here.”
“I am an adult.”
“And you have demonstrated that so well.” 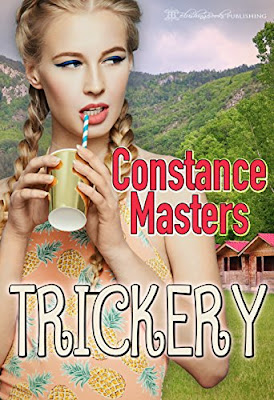 Constance Masters is a wife, mother, grandmother, friend and author.

She writes romantic spanking fiction with the main emphasis on romance.

Constance has always been a sucker for reading romance and that reflects in her writing but she also likes to laugh. Her stories are full of love, laughter and family comedy. It's a lot like her life.

Where can you find Constance?