Wading into the water, Carolyn Evans takes one step too far and finds herself neck¬-deep in the river and fighting for her life.
After saving Carolyn from drowning, Zack Goodman is trapped in an awkward situation when they’re both rescued by a steamboat and hauled on deck.Naked and embarrassed, Carolyn is quick to save them from humiliation and claims they are married.
Will Zack release her from her claim of matrimony? Or will he teach her once words are spoken...they are not so easily retracted?

On the banks of the Trinity River, Sadie Pepperman is looking for a chance to escape the demands of her in-laws. With her husband’s dead, they want her to marry her brother-in-law so they can take control of her farm.
Suddenly, the peace of the day is shattered when her best friend steps too far into the river. Rushing to save her, Sadie meets a handsome stranger that ignites her dormant lust. She sees her friend rescued by a steamship and backs away from Logan Jansen, only to turn her ankle.
The agonizing pain leaves Sadie with the inability to walk. Needing help, she offers Logan a place to stay if he’ll help with the chores on her farm. With his agreement, Sadie adds another problem to her list. Now, not only does she have to worry about how to bring her crops in from the field and run her farm alone but she also has to fight her attraction to Logan.
Can Sadie end her in-laws’ interference in her life,
run her farm alone,
and give love another chance?

More Than Ready
After losing his brother, Kirk Pepperman planned a future with Richard’s wife, Sadie. Kirk wanted to honor his brother and take care of Sadie. She had other ideas and married another man. Now, Kirk is uncertain what he should do with his life.
Mary Beth Owens knows her parents are arranging for her to marry Kirk. The problem is he’s been stuck on the wrong woman for years. Mary Beth is determined to find out if he can please her. If not, then she has no desire to marry him either.
Can these two let go of the past and move into the future? 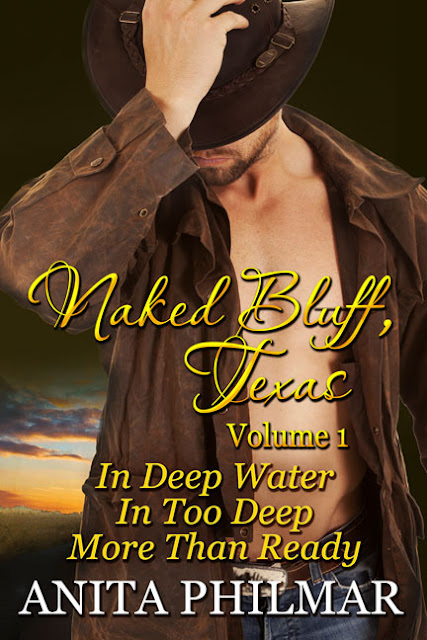 Mary Beth cocked her head and met his gaze dead on. “I have two older sisters who are married. They’ve told me everything I need to know to make you scream for mercy.”
He grinned and remembered the pleasure of talking, teasing, and just being with her. “And after you have your wicked way with me, you hope that’ll seal the bond between us and make me agree to marry you.”
“No. This is a test. I’m not sure I want to be tied to you for the rest of my life. I refuse to be a stand in for someone else.” She unbuckled his belt and worked two buttons loose before he managed to stop her. “If you can’t give me the pleasure I require, then there’s really no reason to waste our time getting married.”
His eyes widened. He blinked several times, amazed at her assumption that he couldn’t offer her, or for that matter any woman, what she needed to make her happy.
Irritated with her, he gritted out, “Are you questioning my ability to be a good lover?”
She shoved his hands aside and dug his cock out from the opening in his pants. “I can’t say. You appear to have the right equipment but do you know how to use it?”
The soft caress of her hand had him gasping for air. He glanced down. The erotic sight of her fingers cupping his length sent his mind into a dizzying whirl. He imagined her hot, wet mouth pleasuring him. “Why don’t you untie me? And I’ll show you exactly what it’s like to be flat on your back while I pound into your twat?”

Need burned through her, and she lifted her body to offer him more. He didn’t disappoint and switched to her other nipple. Again, the sucking action drove her closer and closer to the edge.
She shifted impatiently beneath him and lifted one leg to rest her foot on his wet pants’ leg. With him still dressed, they had a small barrier between them. Yet, the hard line of his erection continued to bite into her thigh.
“Zack...” That was his name, right?
His mouth popped free, and he lifted his gaze to hers. The hand he’d used to caress her breast slipped lower. His fingers danced over her ribs and eased to the center of her belly. “You know, as your husband, I do have certain rights.”
She gasped as he brushed a fingertip over her pussy.
“You’re already wet.” He traced her delicate lips and offered a few brief swipes against her clit.

Excerpts: In Too Deep

Stepping to her side, he bent and lifted her up into his arms. “Sugar, let’s move you into the bedroom where you’ll be more comfortable.”
She moaned and nuzzled her face against his neck. “It’s so hot in here. Can you help me get out of this dress?”
He smiled at the invitation to remove her clothes and strolled across the room. With her three sheets into the wind, he had no intention of doing anything besides enjoying the view. “Sure, as soon as I set you on the bed.”
“Thank you.” She raked a hand through his hair. Her fingers massaged his scalp. She murmured, “I have no resistance when it comes to a blond-haired, blue-eyed fiend.”
She giggled, “Let’s just strip off our clothes and fuck like bunnies.”
“What about your foot? Does it still hurt?” Logan tried to remain grounded, even though his groin tightened with need and he had to work not to take her suggestion seriously.
A frown formed on her brow. “Hey. What did I do to it?”
“You twisted it, remember?” He eased her onto the bed and grabbed an extra pillow that was leaning against the headboard.
“Man, it hurts like the devil.” She lifted her leg as if touching the surface hurt.
Balling up the bundle of fluff, he shoved the pillow under her calf to hold her foot aloft.
She sighed and clawed at the buttons of her dress. “It’s hotter than a billy-goat in a pepper patch in here.”
Familiar with wild southern expressions, Logan tugged her skirt up around her waist and shoved it over her hips. Every second revealed another inch of milky-white flesh. The back of his fingers brushed her soft-as-silk skin. He struggled to ignore the alluring caress and focus on the task at hand.
“Now, if you’ll rise a bit, I’ll pull this over your head.” Logan yanked the fabric upward and freed her from both her dress and her camisole.
“Oh, that feels so much better.” Sadie sank back onto her mattress and stared at him. “If you’ll simply shuck off your clothes, then we’ll heat the house up in another way.”

Read other stories by Anita Philmar

Find them on Anita’s Amazon Page

Bio:
Anita Philmar likes to create stories that push the limit. A writer by day and a dreamer by night she wants her readers to see the world in a new way.
Influenced by old movies, she likes to develop places where anything can happen and where special moments come to life in a great read.
Naughty or Nice?
Read her books and decide.