~ The Victorian Shift ~ by Allison West

Blurb:
In a world of five men to one woman, chaos is just the beginning.
At a young age, Piper and her sister Ruby are placed into the prison system designed to keep the female population safe. With the knowledge Piper obtains about the program that women are forced into at age eighteen, Piper retaliates against the guards and finds herself locked in maximum security.
It’s been seven years since she’s seen her younger sister. For every disobedient act, she’s forced from a prison cell into a cage barely big enough for a dog.
Her determination to rescue Ruby from the program is what keeps her going. In the decade Piper’s been locked up, the world has changed significantly. Women are forced to have a master, obey their every command, or expect severe discipline, in this futuristic yet reminiscent society of the Victorian era.
Can Piper trust the handsome guard, Charlie, or will he betray her at the first opportunity possible? Will the rebels that help free her from the prison expect something in return? Forced to face the world head-on, Piper must learn to submit in order to survive. 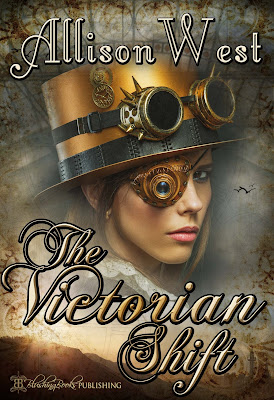 That simple thought of losing absolute freedom and choice had been what got Piper into maximum security. There was no way in hell she was being sent to rehabilitation to be a good girl and marry a man who demanded her hand. Ever since the Victorians had taken over, husbands owned not only all property but also the woman’s body, choosing to do whatever he pleased, whenever he desired. That had been the price of being a woman in 2125.

The thought sickened her.Yes, the world had gone to hell, it was the only thought that made sense. Freedom was a fleeting memory for a woman.

About the Author
Allison West is a #1 International Best-Selling Author in Erotica, BDSM, Romantic Erotica, Sci-Fi, Victorian, and Historical Erotica. She also writes young adult novels under the name Ruth Silver.
Allison West has been inventing worlds and writing stories for years. Her favorite novels are those that leave a lasting impression, long after the final page is read. You can find more about Allison on Facebook and Twitter.
Visit her website here: http://spankingauthor.com/
Don’t miss these exciting titles by Allison West and Blushing Books!
Little Prim and Proper
The Decoy Bride
Delia’s Debt
Little Secrets
Jailed Little Jade
Enrolling Little Etta
The Nanny
Fire Licked
The Murderess