I'm so thrilled to have Libby Campbell on my blog today sharing Book 2 of her Simon in Charge series: Winning Sadie.


She's frightened. He's fearless. Their future lies in the balance

Sadie Donohue – gorgeous, sexy, smart and totally smitten with Simon Jacobson.
Simon Jacobson – gorgeous, sexy, smart, uber-rich and utterly smitten with Sadie Donohue. This sounds like a perfect match, so what's the problem?
Sadie is from the wrong side of the tracks: working class neighborhood, public schools, sausages on the backyard bar-b-que. She was raised to fend for herself and bow down to no one, especially a man. Since meeting Simon, everything her liberated, independent mother taught her has flown out the window. Now Sadie is regularly over Simon’s knee for being her sassy, strong-willed self. And she loves it!
Simon hails from a world of wealth and privilege: gated communities, private schools, servants turning steaks on the bar-b-que. As the owner of a multinational corporation he is used to giving orders and getting what he wants. His life revolves around making millions and socializing with people whose flamboyant wealth intimidates Sadie. Still, she’s thrown into the deep end and told not to do anything to embarrass Simon. Or else!
At their lavish engagement party, Sadie’s hears her mother’s voice echoing in her head, reminding her that she will never fit in. Best intentions aside, Sadie will always be an embarrassment to Simon. That's it. Engagement off!
Simon is in charge and he has other ideas. But will Sadie's mother be their undoing? Can Sadie reconcile her past with her future?
This love story includes spanking an adult woman, explicit sex scenes and more. If such material offends you, please do not read this book. 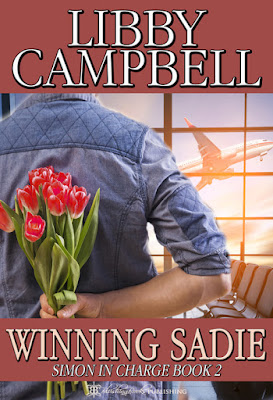 Simon Says, book one in the Simon in Charge series, is
now free on Kindle Unlimited or only 99c in the Amazon Store!

Spanky Excerpt:
He walked back to my chair and rested his hands on my shoulders. “Do you have anything you want to ask me?”
His hands were warm on my skin. I thought about those long, square-tipped fingers, fingers that could make me dissolve in ecstasy or bounce in pain.
“I do,” I said, having thought about this moment for the past two days. I choked down the bitter lump in my throat. “Will you please spank me?”
I bowed my head, in shame at my thoughtless behavior and in shame at breaking every single principle my mother had tried to teach me about not letting a man rule my life.
“I will.” His voice was husky and he kissed the top of my head. “Stay there. I’m going to turn your chair around.”
With that he tipped my chair back and angled it to face the other one in front of the window. He sat opposite me. He was in his 007 suit, as I dubbed it. Dressed to kill. It was an Ermenegildo Zegna bespoke number that he’d had made in Sydney on our last visit. It cost as much as a small car and enhanced his best features: his broad shoulders and narrow waist. In spite of my predicament, I had to admire him. Only I didn’t let it show. I kept my face impassive.
“Why do you think I should spank you?”
“I dunno. It was your idea not mine.”
A smile played on his lips for a second before he pressed his mouth into a firm line. “Lord, Sadie! Before we’d even officially met, I knew you had a well-documented history of insubordination and disrespect for authority but you continue to astonish me with the heights you take it to. Was that really the smartest thing you could say right now?”
“At least I’m not boring,” I offered.
“For the record, you have accepted my leadership well, even better than I expected, in some ways. But, as I explained from our earliest times together, I demand obedience from you if you’re going to share my life. Also you must know by now that I’m continually raising the bar and will not cut you any slack. Is this clear?”
“Abundantly.”
“And you’re still willing to work in this constantly changing landscape?”
“I am.”
“And be spanked for failure to comply?”
He was starting to piss me off. This long discussion was intended to draw the session out, to worry me even more and build on my anxiety. I just wanted to get past the worst and go have lunch.
“Didn’t I just ask for the damn spanking?” I snapped.
This time he didn’t hide his grin. “Before you add to the penalty, would you like to go through the reasons you are about to be spanked? I want to be assured that you understand why this is happening.”

Libby lives on the West Coast of Canada with her husband of over twenty-five years. An avid reader, she savors books that feature strong, independent women and the loving men who challenge them.

She loves mountain hikes, deep bubble baths, and all animals, but particularly small dogs with big attitudes and big dogs who think they are lap dogs. She’s a four season woman who enjoys winter nights in front of a fire, summer sunsets on the beach, and all the in between months.

She reads and writes for pure escapism. If you like her books, she hopes you will leave a review, to encourage her in my world-building.

Even though I have read your first book, Simon Says, can you tell my friends about your newest release?

Winning Sadie starts when the last guest from Simon and Sadie’s weekend long engagement party has gone home.
Accustomed to deciding what he wants and then getting it, Simon assumes all he and Sadie need to do now is finalize their wedding plans.
However, after a week-long visit from her mother, Sadie has started to question whether she should marry Simon.
When her mother and grandfather are injured in a car crash, Sadie hops on the first plane east and leaves Simon behind in Vancouver. He has to reach across the continent to try to win her back.
Even though Winning Sadie is book two in the Simon in Charges series, it can be read as a standalone novel.

And are you working on anything right now? Will you sneak and tell me about it? I won’t tell anyone if you don’t…

Generally I’m kind of superstitious about talking about any work in progress. It feels like an invitation to disaster…but my current one is almost finished so I’m happy to share:
Book 3 in the Simon in Charge series, tentatively titled Sadie’s Christmas Waltz, follows this lively couple as they try to settle down to a normal life on the West Coast. They need to find a home to call their own and plan a wedding. Sadie wants to return to her volunteer work with homeless people on the Downtown Eastside. Simon has agreed that they will travel less so that they can share a more regular life together.
They find their dream home quickly, only to discover big obstacles in their way. Sadie’s return to volunteer work lands her in a dangerous situation.
Wedding plans very quickly become a low priority.

So what inspires you?

Power dynamics in a relationship always intrigue me. With so many contemporary partnerships ending in divorce, I like to play with the notion of what brings people together as well as what drives them apart.

What books have influenced your writing most?

While writing this genre, which I’ve been doing for only a year, I like to immerse myself in the books of other writers who are doing it well. There really are too many to name but lately I’ve been enjoying the work of Amelia Smarts, Renee Rose, Louise Taylor, Jane Henry, to list a few.

When you write do you ever model your characters after real people?

Simon’s ease with languages is based on two people I know, both men, both of whom only need 4-5 hours exposure to a language to develop working fluency. What a gift!

What do you hope people will take away from your books?

How did you come up with your title?

Simon was just so assured of his ability to command whatever he wanted in Simon Says, it was Sadie’s turn to have her name on the cover.  It was Simon’s turn to make an effort to charm her back to his side so Winning Sadie came easily.

Do you have any advice for other writers?