I love pirate stories. Aside from cowboys, they're my favourite book heroes - always so rough and rugged but with a heart of gold (maybe not in real life, but we're talking romance heroes here!). So I'm thrilled to host Maisy Archer on my blog today with her fantastic spanking buccaneer! 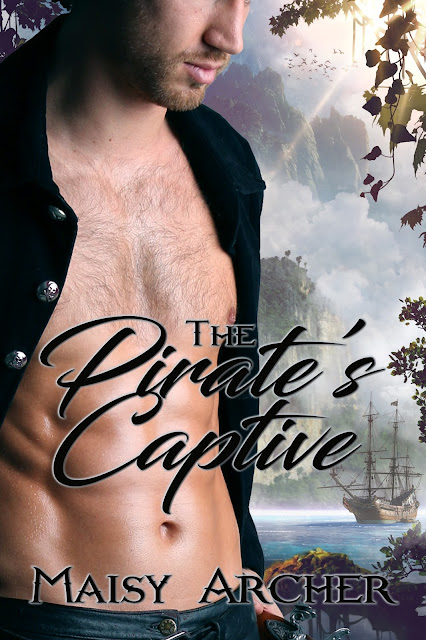 BLURB:
When a notorious pirate demands a ransom from her family in return for lifting his blockade of the local port, twenty-one-year-old Evelyn Hollywell takes matters into her own hands. Her plan to thwart the lawless rogue quickly goes awry, however, when she is carried off from her home and held as a captive aboard his ship.
Evelyn quickly discovers that while the handsome buccaneer has no intention of doing her any harm, he will not tolerate disobedience, and when she attempts an escape she ends up over his knee for a painful, embarrassing spanking in front of his entire crew. Though the stern punishment infuriates Evelyn, she cannot help wondering what it would be like to be mastered much more thoroughly, and soon enough she is blushing crimson and quivering with desire as he teaches her exactly what it means for a beautiful lady to surrender her body to a dominant man.
Despite her growing attraction to her captor, however, his plans for her remain a mystery. She is to be delivered to a man in Boston, but she knows neither who he is nor what he wants with her. All she can be sure of is that with each passing day she feels less like a prisoner and more like a priceless treasure. But will old enemies or the dangers of the high seas tear her from her lover’s arms?Publisher’s Note: The Pirate’s Captive includes sexual scenes and spankings. If such material offends you, please don’t buy this book.

Here's a snippet - this gave me tingles!
Fury overwhelmed me, like a veil falling over my eyes.
His hold on me didn’t weaken and, in fact, he lifted me even higher against his chest, but my anger burned off the last vestiges of the drug’s stupor and I fought like a tiger. With the back of my heel, I landed a sharp blow to his shin that made him suck in a breath and threw him off-balance. His grip on my arms weakened just a fraction, and I threw myself to one side, freeing one hand. I elbowed him in the ribs and he dropped me. I landed and lightly spun on my heel.
Time seemed to slow down, the way it often does when something life-altering is about to happen. I saw my pale hand swinging up, saw his tanned, bristly cheek, still taut with the vestiges of his smile. There was a single second where I could have diverted my hand, avoided the blow, but I didn’t. I had been held under siege, drugged, and kidnapped, and I had withstood it all. But I would not, could not let him laugh at me.
The crack of my hand against his face sounded like the blast of a cannon. All conversation on the forecastle deck and the quarterdeck had stopped, all movement had ceased, but I was only dimly aware. The seagulls were crying, the boat swayed with the tide, and the man in front of me was furious.
My uncle Richard’s anger was unpleasant, but I’d seen it often enough that it no longer moved me. My father’s anger had been a fearsome thing, but I’d learned to stand strong against it. I’d lived among sailors long enough that I’d seen the roiling, seething anger that some men couldn’t control, and I’d learned to be cautious.
I had never, never seen anger like that which I now confronted.
His eyes boiled, his breath heaved. His arms clamped around me once more, this time painfully tight.
“Oh, beauty,” he told me, his deep, compelling voice slicing through the silence like a whip. “You will regret that.”

Maisy is an unabashed book nerd who has been in love with romance since reading her first Julie Garwood novel at the tender age of 12. After a decade as a technical writer, she finally made the leap into writing fiction several years ago and has never looked back. Like her other great loves - coffee, caramel, beach vacations, yoga pants, and her amazing family - her love of words has only continued to grow... in a manner inversely proportional to her love of exercise, house cleaning, and large social gatherings. She loves to hear from fellow romance lovers, and is always on the hunt for her next great read.