I'm thrilled to have Anita Philmar back on my blog to share Book 7 of her Naked Bluff Texas series A Cowboy's Passion - a super hot MFM menage historical western.

Tess Van Pelt doesn't have time to grieve the loss of her husband, not when the wolves are already at the door. Still, she has a lover that is willing to help save her. He introduces her to his cousin, Reece Bristol Smith.

As a lawyer, Reece can keep the debtors at bay. The problem or solution is he can't keep his hands off Tess. With her deceased husband accused of murder and the major creditor making unreasonable demands, Reece has to secure Tess's future in the best way he knows how.

Now, will Tess trust him and his cousin to keep her safe or will he need to teach her a few lessons in handing over control to him? 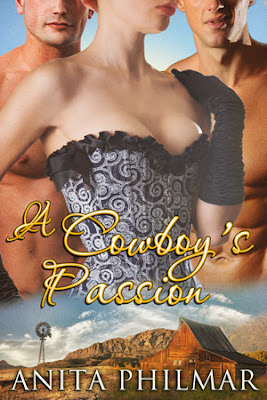 She gulped for air.

His lips created a blazing trail along her jaw and dipped to the side of her neck. He nibbled his way up to her ear, using tongue and teeth to touch every inch. He tugged on her earlobe, and she quaked in his arms. "Admit you belong to me."

Strung out on the heavenly path of his hands on her back, ass, and thighs, she worked to put together a coherent reply. "I, uh..."

"Need to answer," he whispered and lifted his head. The blistering intensity of his gaze fell on her face, but her eyelids refused to budge.

She whimpered, hoping he'd realize she wanted to give into his demands. Tears leaked from her eyes. The fortress where she'd stuffed all her emotions over the last few days quivered under the force of the overwhelming burden. Words lined up in her head, but her throat remained clogged.

"Reece, don't torture her." John's voice slashed through her efforts to hide from the pain. "She's been trying so hard to be strong and has denied herself any physical release."

"What? Why would—" Reece captured her waist and tugged her away from his body.

Instantly, a black wave of despair washed over her. Did he intend to reject her? Before she could say a word, John cupped her hips. The hot caress of his clothed body meeting hers sent her mind into the wild scenario of having both of them at once. Then his sensual touch darted over her stomach and toyed with the trim curls between her legs.

"Easy love, we'll take care of you." The hot brush of his words caressed her right cheek. "Reece and I are both hungry for a taste of you. Once he's had his fill, I'll feast on you too."

Other Books in the  Naked Bluff, Texas series

In Deep Water   Skinny-dipping to cool off in the Trinity River couldn't cause any problems...could it?

In Too Deep   The peace of the day is shattered when her best friend steps too far into the Trinity River.

Duty's Bride   Can Sadie have a new life or will her old one rear its ugly head?

More Than Ready   Can a determined woman win her heart's desire?

A Cowboy's Pleasure   Does this cowboy want the job he's being offered?

The Country Doctor's Bride   Run from a murder or marry a doctor, which one will she choose?

Anita Philmar likes to create stories that push the limit. A writer by day and a dreamer by night she wants her readers to see the world in a new way.

Influenced by old movies, she likes to develop places where anything can happen and where special moments come to life in a great read.

Read her books and decide.