~ A CHAT WITH DARYL DEVORE ~

To save Darien's life his brother asks, "Can you walk in high heels?"

Daryl Devore has popped over today to share book 1 of the Two Heart One Love trilogy: What Happens in Bangkok.


What's your genre or do you write in more than one?


I don't think I'd ever want to try Creative Literary Fiction. Definitely not my cup of tea.What fiction do you read for pleasure?


Mysteries – I have all of Agatha Christies, Sir Arthur Conan Doyle and Dorothy L Sayers' works, plus several other authors.Tell me a bit about yourself and what inspired you to become a writer?
I live on the Ontario side of the Ontario/Quebec border. When I'm not writing, I'm a yoga class. As to what inspired me - I learned to print and was able then to put my stories on paper.
What is your greatest temptation:


In men: Matt Damon – hands down – no question.
In food: chocolate – no wait- cookies – oooh chocolate cookies
In clothes: jeans – I'm a pretty casual person although I love checking out $900 Prada heels.

Do you have a daily writing routine?  If so, please share.
Let's see. I get up. Head to my laptop. Check emails. Then chaos ensues as life kicks in. So no – no writing routine.


What is your favorite book?
I have no idea. I have book shelves full of my favourite book.


What is your favorite movie?
The Bird Cage.


What do you have out now?


What Happens in Bangkok

To save Darien's life his brother asks, "Can you walk in high heels?"
Erika Bailey, owner/manager of a drag queen club in Bangkok, Thailand has happily settled into all aspects of her new life, except for her lack of a love life. When a new diva auditions, Erika is bewildered over her instant attraction to the blond God, Apollo.

Darien Scott is on vacation after a world tour and mistakenly figures the safest place to be is at The Black Dragon with the head of a Triad. When the club is hit, Darien is the only person to get out alive. Now he's running from the police and a Triad. Mistake number 1.

Disguised as a drag queen, he's hired by Erika, but falls hard for his new boss, then struggles with not coming clean with her. Mistake number 2.

Can he fix his mistakes and find a life filled with love or is he headed straight for mistake number 3? 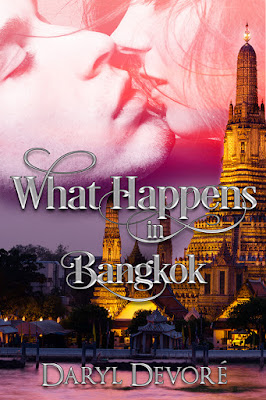 He rolled his neck and shoulders as the heat worked its way into the tension. Again with the pity-party. Hmph, must be the wine talking.
A soft pop in his neck signaled the release of some tension. Wine talking? Could I have misinterpreted what Erika meant about the wine?
A spark of hope surged up from the depth that Darien had shoved it, but was immediately crushed. He slapped his hand on the wall. Stop being so stupid. She's not interested in anything long term. You are so off your game. Tired from the tour, then the stress of the shooting. Have a few laughs, then go home and get back to being Darien Scott.
With his head tilted upward, the rain-like steam trickled over his face and dribbled down his back. But it would've been nice. Her kisses ― what the…
The pressure of two lips against his bare upper arm snapped him from his thoughts. He lowered his face, swiped at the water, then opened his eyes.
No, he hadn't imagined the kiss. Standing next to him was Erika, fully clothed. An unverbalized hope had materialized beside him. She smiled as he turned to face her. A mixture of thoughts and questions shot through his mind. She silenced them all with the soft pressure of her finger on his lips.
Darien stretched out his hand to cup her cheek, but she slipped back out of his reach. She lifted her arms and dragged her fingers through her short hair, released her head and shook it. Droplets splashed against the wall. She moved forward a step so that the water spraying out splashed against her breasts and belly. Her blouse stuck to her like a second skin.
The vision of his peeling her blouse off and exposing her breasts brought his cock to attention. She lowered her gaze, running her tongue over her top lip. Darien swallowed–hard.
She pulled her fingers from behind her neck, trickled the back of them down her cheeks to her chest, then paused. Extending a finger, she toyed with the top button of her blouse.
Darien's focus locked on to even the tiniest movement. The flutter of an eyelid hit him deep in his belly. Erika spun away from him, shifting to peer over her shoulder. She matched his gaze and didn't blink. Water streamed down her cheeks, dripping off the end of her nose. Jealousy burned in Darien that the water could touch her and he knew he wouldn't be allowed. She planned on driving him crazy and he was willing to let her.
With the fluid grace of a dancer, Erika extended her arms, reached behind and tugged her blouse out of her waistband. She moved her hands before her. Although Darien couldn't see, he knew she'd undone the top button of her blouse. She opened the collar, exposing a bit of neck, then released another button, pulling the top of the blouse open a bit more. The fourth time, Darien had to clench his hands to stop from storming over, grabbing her blouse and ripping it open.
He wanted to–craved–to see her naked. Sprawled out beneath him. But he'd wait. The anticipation was sublime. 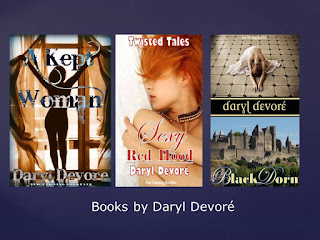 Where can eager fans find you?
Blog - http://daryldevore.blogspot.com 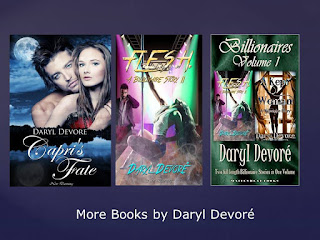