Her Rogue Viking ~ By Ashe Barker

He has her body. Will she give him her heart?

A note from Ashe:

I have always been fascinated by Vikings. Strong, sexy warriors, ruthless, dominant and determined – what’s not to like? It was only a matter of time before I wove a story around these fierce raiders who rampaged through Scotland and England for over three centuries, eventually settling and leaving their indelible mark on our history.

A Viking raid was indeed a ferocious affair. They relied on what would nowadays probably be termed ‘shock and awe’ swooping in from the sea on their fast dragon ships to attack with vicious and deadly effect. The Nordic raiders would be gone almost as swiftly as they arrived, leaving a trail of destruction in their wake. The modern equivalent would be a helicopter attack on a sleepy rural village by SWAT teams armed with automatic weapons– the local people would hardly know what hit them.

I have employed a certain amount of poetic license, but I was determined to recreate the Viking era to the best of my ability – their homes, their clothing, what they ate, how they lived. I hope readers will be as entranced as I am by these creative and charismatic raiders, and perhaps forgive them their more outrageous little foibles.

To celebrate the release of this hot Viking spanky novel, Ashe is running a rafflecopter

Though Fiona puts up a brave fight when her village is raided by Vikings, she ends up being carried off over the broad shoulders of Ulfric Freysson, the leader of the Norsemen. The stern, ruggedly handsome warrior quickly makes it clear that she belongs to him now, and her best efforts to escape merely earn Fiona a painful, humiliating switching on her bare bottom.

Her captor’s bold dominance sets Fiona’s passion ablaze, and when he brings her to his bed she cannot help begging for him to claim her completely. As Ulfric begins training her to please him in any way he demands, Fiona finds herself falling in love with her new master, but she soon realizes that there are those among his people who still see her as an enemy. When her life is threatened by a member of his own family, will he stand ready to protect her no matter the cost?

Publisher’s Note: Her Rogue Viking includes spankings and sexual scenes. If such material offends you, please don’t buy this book. 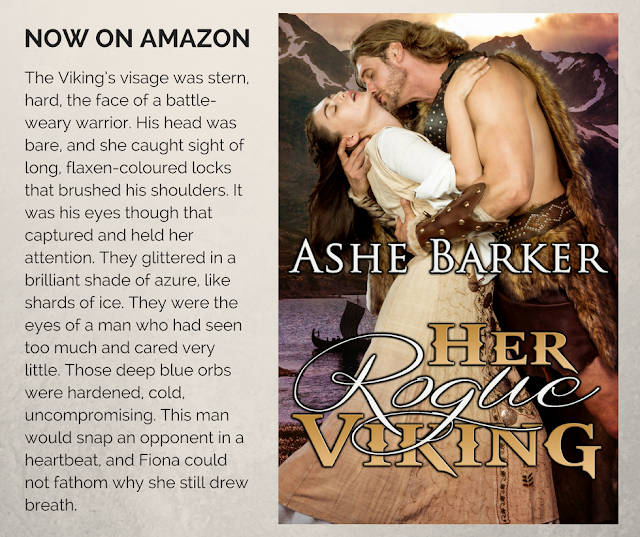 Buy on Amazon or Read Chapter 1 for free

Ulfric carried her to the fallen tree and set her down beside it, taking care to allow her to lower her good leg first. Then, still ensuring that her weight remained on her uninjured foot, Ulfric helped Fiona to turn and face the trunk, then eased her torso forward until she was balanced across it. The furs and blanket provided a soft cushion. Fiona could find no reason to complain that her comfort was not considered as Ulfric patted her soon-to-be-punished bottom.

“I will lift you a little higher, to ensure that your feet are off the ground and taking no weight, and to offer me a better target, naturally.” He did not wait for any further comment from Fiona. In moments she was dangling over the tree trunk, her feet inches from the bare earth and her head and shoulders balancing her weight on the other side. The grass and a light dusting of fallen leaves were just inches from her nose but she could just make out their shapes in the gathering gloom as she quivered in this unfamiliar and vulnerable position.

Her father had been no disciplinarian. In all her nineteen summers no one had ever so much as slapped her wrist, let alone bent her over a fallen tree for a public switching. Fiona wondered if it was possible to die of humiliation.

She managed not to whimper as her skirts were raised above her waist, then tucked under the woven braid that served as a belt. Fiona was acutely aware of the half dozen or so Viking warriors who had gathered to observe the proceedings. They were all now afforded a fine view of her upturned, naked buttocks. She was glad she could not decipher the exact meaning of their calls and remarks, though the general gist was plain enough.

The jocularity ceased abruptly at a word from Ulfric. The men remained in place, watching, but they no longer offered their lewd observations.

Fiona was accustomed to harsh winters, but the bitter chill of this Nordic early evening was equal to anything she could recall in her own country. She shivered as the icy breeze caressed her bare backside and could not help clenching as Ulfric bent to select the first switch.

“Fear not, little wench. You shall soon be feeling a good deal warmer.” He swung the switch in an experimental arc, slow at first, then fast enough to produce an ominous whistle. Fiona shrieked.

Ulfric chuckled and moved in close. He laid the palm of his free hand on her bottom, the caress almost affectionate. “Try not to clench, though I realise it is difficult. Are you ready?”

There was nothing to be gained by delaying matters. Fiona nodded, then clenched her bound hands into fists as she tensed for the first stroke.

“Aagh!” She let out a shrill scream as fire exploded across her right buttock. Her entire body jerked with the force of the blow, though she had been expecting it. This hurt though, more than she had ever imagined.

“One,” Ulfric intoned. “Be still, Celt. Settle down and we shall continue.”
Somehow, through the haze of pain, she heard his words and managed to obey. Moments later fire snaked across her left cheek.

He was right, she did not. Fiona willed her tense muscles to soften and drew in a shuddering breath.

She was managing the pain just slightly better now, no longer so shocked by the intensity of sensation. She managed not to cry out, and needed no further reminders to keep her buttocks soft.

Fiona writhed against the blanket. Despite her determination to bear this ordeal with fortitude she was unable to remain still, nor could she contain her tears that flowed unchecked across her face.

Ulfric paused to once again lay his palm over her throbbing backside. Her bottom was on fire and she flinched under his touch though he was not rough with her.

“You are doing well. Just three more to go. Shall I continue, Fiona?”

No! Enough! “Yes. Please, just finish this and let me get up.”

USA Today best-selling author Ashe Barker has been an avid reader of fiction for many years, erotic and other genres. She still loves reading, the hotter the better. But now she has a good excuse for her guilty pleasure – research.
Ashe tends to draw on her own experience to lend colour, detail and realism to her plots and characters. An incident here, a chance remark there, a bizarre event or quirky character, any of these can spark a story idea.
Ashe lives in the North of England, on the edge of the Brontë moors and enjoys the occasional flirtation with pole dancing and drinking Earl Grey tea. When not writing – which is not very often these days - her time is divided between her role as taxi driver for her teenage daughter, and caring for a menagerie of dogs, tortoises.  And a very grumpy cockatiel.
At the last count Ashe had over forty titles on general release with publishers on both sides of the Atlantic, and several more in the pipeline. She writes M/f, M/M, and occasionally rings the changes with a little M/M/f. Ashe’s books invariably feature BDSM. She writes explicit stories, always hot, but offering far more than just sizzling sex. Ashe likes to read about complex characters, and to lose herself in compelling plots, so that’s what she writes too.
Ashe has a pile of story ideas still to work through, and keeps thinking of new ones at the most unlikely moments, so you can expect to see a lot more from her.