I'm thrilled to have Kryssie Fortune on my blog today with Book 1 in the Heroes of Westhorpe Ridge series.

Blurb
Abigail Montgomery, a small town schoolteacher with zero self-confidence, dreams of the Dickensian Christmas her family never enjoyed. Each month she attends a masked BDSM club, but her next visit will be her last. If she doesn’t marry within the next year, her brother won’t inherit Montgomery Hall. Desperate, she advertises for a husband.Jared Armstrong, a former Marine sharpshooter and occasional Dom needs to $125,000 to get his family out of a hole. His solution—to marry Abigail Montgomery for her money. His only regret is his wife won’t accept his spanking lifestyle.Gradually, Abigail comes to dream of making their marriage real, but she promised Jared a divorce two years after their wedding. Can they share some Christmas magic as their relationship faces extortion threats, a kidnapping, and an attempted murder? Or will Jared break her heart when he walks away?

Excerpt:
He held her a moment longer than necessary, then dropped a gentle kiss on her forehead. When he released her, she perched on the edge of the bed. The way she stared at him reminded him of a startled fawn about to run. Stepping back, he closed the door and checked it had locked behind him. “First, we’ll address your disobedience and how you put yourself in danger. After I’ve spanked some sense into you, we’ll talk about what happened.”
He hadn’t meant to unleash his dominant side on his unsuspecting wife, but if those creeps in the car park had gotten another shot off, she might have bled out on the bedroom floor. He refused to think about his Abigail wounded and bleeding because those idiots had come after him. Leaning against the door, he folded his arms across his chest. “Take off your robe.”
Abigail’s gaze darted about the room. “You’re going to spank me? When I tried to help you?”
He pictured her bare assed and laid over his knee. “Hell yeah. You put yourself in danger. I’d never have forgiven myself if those bastards had put a bullet in you. Why are you still wearing your robe?”
He knew this pushed her boundaries, but he needed to make her understand how much he needed her to stay safe. Okay, he suspected no one had spanked her even when she’d been a child, so he’d go easy on her virgin ass. Afterward, he’d screw her, if she still wanted him. “Normally I’d blister your bare butt with a paddle or spank it until you couldn’t sit for a week. For the first time, I’ll limit your punishment to five bare-bottom slaps.” 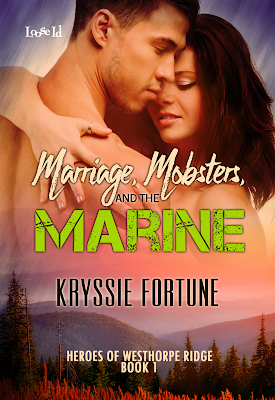 Author bio
Kryssie’s a girl who loves to shopping, history, and writing. Back in 2001 disaster struck and her heart valve collapse. Even her heart specialist told her to make her will. Prognosis shocking. Outcome amazing. Ever since Kryssie’s been chasing her dreams. She’s visited the ancient Greek sites she read about as child, taken a trip to Pompeii, and visited the Orkney Islands.
Her biggest challenge was writing the book she always swore she’d get around to one day. It took a while, and being dyslexic, she lacked the confidence to self-publish. Fortunately, Loose id accepted her first book, To Wed a Werewolf, and she’s been writing ever since.
Social LInks