Love Under the Violet Crown ~ by Sterling Scott & Sahalie Blue

I'm so thrilled to have awesome Blushing Books writing duo Sterling Scott and Sahalie Blue on my blog today with their new sci-fi spanking book Love Under the Violet Crown.
That is one gorgeous cover! The cover alone makes me want to check out this book! 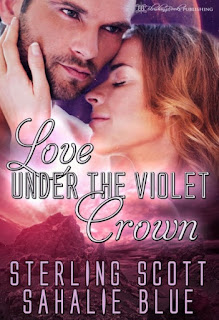 Blurb:
Dr. Julie Patterson is an Alien Anthropologist. She is on a quest to bring peace to the Galaxy.

Julie and her scientific team are aboard the starship Kart Wilhelm, orbiting the planet Maia-3 with its population of Bronze Age humanoids. Their mission is to redirect the focus of the war-like beings to become successful trading partners. To accomplish this goal, the invading scientists kidnap key individuals and implant new ideals of peace and freedom into their brains.

A native of Maia-3, Iva is a member of the wealthy and deeply spiritual Violet Crown family. Following the custom of her people, her father arranges a marriage to the mathematician, Archmed. Although Iva is an influential citizen, her marriage is only for producing children. However, she longs for true love with her husband. She wants him to reject the concubines he uses for pleasure and lie with her alone.

One night, the scientists seize Iva and Archmed. Iva mistakes them for the gods. Remembering the experience, she has a plan to capture her husband’s love.

The best laid plans of scientists and natives go awry. Following their long voyage through hyperspace, the starship’s crew is distracted by the amorous, scantily-clad natives on the warm, inviting planet. Combining business with pleasure creates problems for Julie’s objective. Meanwhile, Iva is kidnapped by a sinister native bent on having her as his wife. The
fledgling unity on Maia-3 is shattered.

Can Julie and her lover, Marine Lt. Harold Hunter, restore discipline to the ship and bring peace to the natives? And what is Dr. Patterson’s secret mission?

This sexy, spanky, romantic romp in outer space is a sequel to “Love on a Forbidden Planet”, but it can be read as a stand-alone novel.

“Come with me and do as I say.” He grabbed Julie’s hand and snatched her up.
“What do you have in mind?” she asked.
Harold did not answer. In her haste to follow the Marines, Julie had forgotten to bring a toga and wore her uniform jumpsuit. Harold pressed his finger to the stud under her collar and ripped the fabric from her body. Nude, he led her from their concealment toward the hut where the three Athens women were being held.
“We are going to create a distraction, and you are going to play along,” he answered. “Make a lot of noise. Yell and scream your head off.”
“Okay, you mean like play acting?” she queried.
“You got it, babe.”
Julie gasped as Harold bent her at the waist and tossed her over his shoulder like a sack of flour. With her bare bottom on display, he marched her into the middle of the village. One onlooker released a long, loud whistle which summoned more men.
“Put me down, you lout!” she yelled as her arms pounded his back. “What the bloody hell do you think you are doing? Put me down this instant!”
Harold's hand slapped her ass cheek and he yelled at the top of his lungs, “Silence, wench! I'll put you down, all right. I'll put you down over my knee. I'm going to teach you a lesson.” He quickly ran over to the center of the village where an old stone well sat. He plopped down on the second step, setting Julie on the ground. Ignoring her protests, he pulled her over his lap, with her bottom positioned high on his rigid thigh. “Naughty girls who lie get spankings, and you are going to get the spanking of your life, my naughty young lady.”

About the Authors:
Sterling Scott writes of his imagined adventures within the backdrop of actual historical events. While some of his stories are more fictional than others, he likes to entwine real events into a new version of how it should have happened. Additionally, he includes experiences from his life and those friends who have shared events with him.
When not writing, Sterling travels the highways and visits his children. He spends a lot of time playing with his first grandchild.

Sahalie Blue was born and raised in the Midwestern US along the shores of Lake Michigan. She now lives in the Pacific Northwest, treasuring the great outdoors of her new home.
Sahalie loves hiking in the region's majestic Cascade Mountains, dense mossy forests and sagebrush-filled deserts. Her revered, special place is Sahalie Falls, a roaring waterfall that pounds the McKenzie River into a rainbowed mist.
She's been married for several years to a computer guy who loves to tell jokes. She appreciates laugh-out-loud moments. She enjoys reading just about anything, but mysteries, romances, and science fiction are her favorites. She is passionate about expressing her thoughts and feelings in her writing.