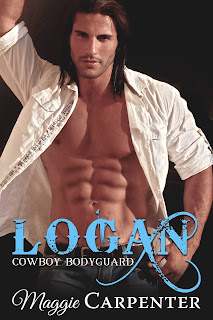 Wow! I can't believe it's been over a month since I've updated this blog! So much has happened with me on the writing front in that time but first, here's a scorching hot new release from one of my favourite authors Maggie Carpenter!

The cover of this book is so HOT, HOT, HOT! I can't decide which I like better - his eyes or his abs?

A dominant cowboy with mesmerizing eyes, and a six pack she could wash her clothes on, is a dream come true…or is he?

Brandy Coleman's face is flaming red. As the owner of a barn for retired horses she's had her share of mishaps, but nothing can compare to this deeply embarrassing moment. She is looking up at a stranger who has the dreamiest hazel eyes she's ever seen, and a six pack beneath his open shirt that is making her knees weak. The problem? Her hose burst and squirted water everywhere, leaving her hair a tangled mess and her clothes absolutely drenched.

Logan Scott has arrived at Rainbow's End Ranch to apply for a job as a ranch hand. He is led into the barn by an exuberant Golden Retriever where he is met by a stunning sight. A gorgeous girl, dripping wet, is bent over wrapping a towel around her head. As she straightens up he can't help but notice her thin pink T-shirt is clinging to her luscious curves.

The sparks fly, Brandy hires him, but as the days pass a threat looms over the ranch...and Brandy herself.

A known thug wants her property and won't take no for an answer. Logan declares he's changing his job description from ranch hand to bodyguard, and to keep her safe, Brandy will have to do as he says. Will she...?

LOGAN:Cowboy Bodyguard is a steamy love story laced with danger and suspense. Like all Maggie Carpenter books it is a riveting page-turner with unexpected twists. Pick up your copy today, and escape to the romance at Rainbow's End Ranch. 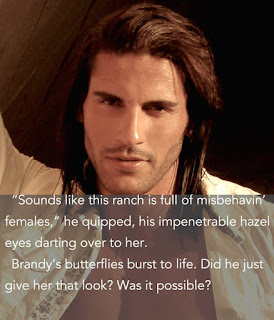 Get LOGAN on Amazon HERE!

Sexy Spanky Excerpt:
Feeling a hot rush ripple through her body, she rose to her feet and headed across to the stove. In a large copper pot she had a variety of utensils, and selecting three wooden spoons she quickly returned, placed them in front of him, then pulled down her jeans and underwear.
"This is the weakest," he said picking up one that was relatively thin. "This is better," he continued, slapping the second into the palm of his hand, "and this here would be the most painful," he finished, selecting the last which was larger and heavier. "Got it?"
"Yes, Sir," she nodded, gazing down at them and wondering where Logan was going with the conversation.
"You're gonna get six swats on each cheek, one side for gallopin' off, and the other for carryin' on at Lyle. You decide which spoon you deserve."
"Me?" she asked, her eyes wide. "What if I guess wrong?"
"This isn't a test. You can't guess wrong. Tell me which spoon you think you deserve."
"Uh, well not the first, but the third would be too much. I know I have to learn to control my temper and not jump the gun, but it takes time to change, and it wasn't purposely defiant. I didn't sit there and say to myself, I know this is wrong but I'm going to do it anyway, so, uh, the middle one, that would be right."
"I agree," he said picking it up and rising to his feet. "Elbows on the table and arch your back. There are only two rules. Don't put your hands behind you and don't kick out. If you do either of those things I'll start over. Any questions?"
"No, Sir," she replied, her butterflies turning into a thousand tiny gymnasts as she assumed the position.
"This is for takin' off down that hill without so much as a word to me. You didn't ask what I thought, or even if I wanted to go with you. I'm your bodyguard. Get that through your head!"
"Yes, Sir, and I'm sorry. I'll try to think twice next time."
"If there is a next time, and you bolt like that again, it'll be twelve hard swats with the heavy spoon," he scolded. "Got it?"
"Yes, Sir."
"You ready?"
"Yes, Sir."
Brandy stared out the window and clenched her teeth as she waited for the first smack. He was smoothing the back of the spoon across her skin, and when he tapped it lightly she assumed it meant he was about to start. She was right. The first swat landed with a keen sting, and squeezing her eyes shut she swallowed back her yelp. The second landed in a different spot but hurt just as bad and was followed quickly by the third.
"OWW! Sir, OWW, that hurts," she exclaimed squirming her hips. "Ouch, ouch, ouch."
"You do understand it's supposed to hurt," he declared pausing for a moment. "That's why it's called correction, or punishment if you prefer that word."
"Yes, Sir. I do know it's supposed to hurt, but damn."
"Are you learning?"
"Most definitely, Sir."
"Are you ready for the next three?"
"Yes, Sir."
He had purposely delivered the swats with force. This was her first punishment spanking, and if they were going to move forward, and she really did want discipline and direction from him, she needed to understand that's exactly what she would get. He landed the next three rapidly and just as hard, the last landing on her sit spot.
"OW, shit, shit shit!"
"I did say you'd be drivin' to Brownsville on a hot seat, and I meant it, Brandy."

A BIT ABOUT MAGGIE

Award-winning and best-selling author Maggie Carpenter has published over fifty romance novels, and is the recipient of a number Spanking Romance Reviews awards spanning a variety of genres. Her readers describe her work as, romantic, funny, suspenseful, beyond a five-star read, exciting romance with a ton of surprises.
Her work includes a best-selling twelve-book contemporary cowboy series, Cowboys After Dark, (http://amzn.to/2ihCNtp), a warrior fantasy trilogy, Warriors After Dark, (http://amzn.to/2iE0cDa) contemporary love stories, and several Victorian romances. His Willful Bride was a #1 best-seller for several weeks and a BookBub Feature Deal. She is best known for her smart, witty, strong-willed women who  bring unexpected challenge, mystery and humor into the lives of passionate, dominant men.
Maggie has a history in show-business both in front of and behind the camera, but moved from Los Angeles to live in the Pacific Northwest to pursue her writing. She is an equine enthusiast who rides every day, and writes until the wee hours of the morning when her eyes close only because they must.
This author loves to hear from readers. You can contact her through her website: www.MaggieCarpenter.com. To sample her work for free, go to, www.3FreeBooks.com.