On my blog this year I'm going to share snippets from my books, the inspiration behind my books, extra scenes that aren't in my books, and whatever else comes to mind.

To make sure you don't miss a single post, you can sign up via email over there in the sidebar to the right and get them all direct to your inbox! ----->>

To start the year off right, I'm going to share an excerpt from my brand new book High Country Daddies

It's from the very first spanking that Carly receives on Ryan's Peak Station at the hands of one of her men.

Also, I've got free stuff. Lots of free books to fill up your kindle this summer (if you're Downunder like me) or to warm up your winter if you're in the freezing northern part of the world. Scroll right to the end of this post to find them! 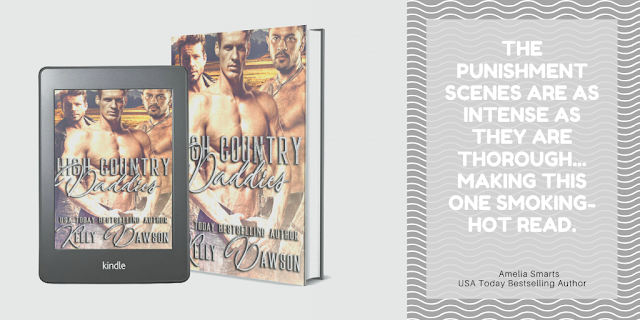 Mike had his head deep in the bowels of an old tractor but as soon as he heard her he jumped down from the wooden crate he was standing on and came out to her car. The little dog she’d seen yesterday came running out to greet her, running in circles around her feet and barking, but not getting close enough for her to touch.
“Get out of it Goof,” Mike told him, and the little dog disappeared, scampering through the fence and away out of sight. Carly stared after him longingly. There had been a little dog like that at the place she’d kept her horse… Don’t think about that, her inner voice ordered. It’s in the past. Leave it there.
Mike stepped forward. “This tyre,” he said gruffly, bringing her back to the present and away from her memories. She looked up at him, he was pointing out the front drivers side tyre. “I can’t believe you drove all this way on a tyre like that. Look at it! There’s canvas showing through!” She looked where he was pointing and reached forward to run her hand over the rubber.
“Don’t touch,” he warned gruffly, grabbing her wrist. “There’s wire poking through, you’ll get hurt. It’s a wonder that thing didn’t blow,” he growled, straightening up to fix her with a stern stare and releasing her wrist.
Electricity shot up her arm from his touch. The knot in her stomach wound itself tighter as Mike frowned down at her, scolding her in that deep, growly voice that made her feel like a naughty child.
“If you’d hit a sharp stone on that canvas you would have been a goner for sure!”
She gulped. Was the tyre really that bad? She had no idea!
“Give me your keys, Carly,” Mike commanded, stretching out his hand. “You’re not driving anywhere on that tyre - it’s not safe.”
Automatically, her fist tightened around the keyring she clutched in her fingers. She didn’t want to give up her keys. Especially not now that she’d decided to leave. She shook her head, almost imperceptibly.
“Look,” Mike growled. “You should be spanked for driving your car like that. It’s not safe! Remember what we said last night, about safety, rules and consequences? This is a safety issue.”
He kept speaking, but she didn’t hear any more. Spanked was going round and round in her brain. Was that really what they’d meant by consequences? Surely not! The threat of being spanked by the sexiest men she’d ever come across was hardly going to act as a deterrent.
Lust pulsing through her, she gripped the keyring even tighter. Her fingers clutched the thin metal ring as tightly as her bottom clenched in response to Mike’s threat. Her gaze travelled slowly up his body, taking in the lean but powerful build. Heat shot to her core. She licked her lips.
“And if I don’t?” she deliberately kept a light, flirty lilt to her voice, and tipped her head to the side, flicking her hair back over her shoulder as she did so. “You’ll spank me? That’s pretty tempting, you know.”
Mike grinned, humour lighting up his face before he shook his head and forced away his amusement. She felt his whole demeanour change as he frowned. “There’s a vast difference between a good girl spanking and a bad girl spanking,” he growled. “A good girl spanking is the fun one. But what you’re chasing after is a bad girl spanking. Something reserved for naughty girls. You won’t like it at all, I promise you.”
Her tummy flipped. “You don’t know what I like,” she insisted sassily. Even as she said the words, she doubted her sanity. What was she doing, intentionally pissing off the very man who’d just threatened her, when she was all alone with him in the middle of nowhere?

Click here to read it now! Exclusive to Amazon and in KU!

In case you're wondering, yes that scene was inspired by my real life (as many of my books, or bits of my books, are). I'm not known for good car maintenance. I once drove around with the oil light on for an entire week!
And a few years ago, I was quite happily driving around in a car with a very bald tyre...
so bald that the canvas was showing through.
Oops!


And the promised freebies: